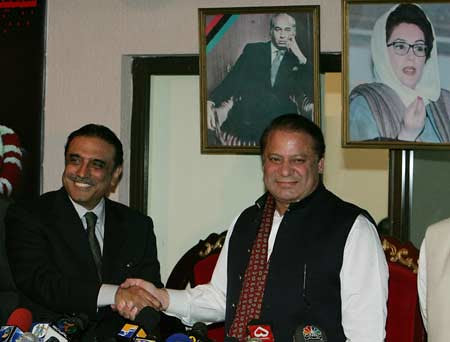 Their new friendship might not be good for the democracy.

Marvel at the audacity of hope in Pakistan. But be warned: the hope is not tenable. Mr. Musharraf is out of favour in his own country but not in Pentagon. Mr. Sharif has not won the largest number of seats but he may still want to be king. Mr. Zardari…well, Mr. Zardarai!

He has trimmed his feudal moustache and is talking the right talk but how long would he remain this way? Besides, would Pakistan Army never march out of its barracks again? And, don’t forget the suicide-happy volunteers of the Pakistani Taliban.

Should we still feel sunny?

They say Mr. Musharraf is almost history. That Pakistan Army would tame its basic instincts. That Mr. Zardari and Mr. Sharif’s grand coalition would carry Pakistan into the much-coveted category of being just another modern, developed, and boring nation.

In Pakistan, Mr. Zardari’s Pakistan People Party is considered a natural rival of Mr. Sharif’s Pakistan Muslim League. For instance, PPP is perceived to be moderate; PML (N) tilts towards Islamic conservatism. While these both might share the same vision about Pakistan’s future, on-the-surface perceptions do matter in politics.

The only way for democracy to blossom in our country is by letting these two parties to remain rivals. For the sake of stability, they should always present themselves as the two leading choices for us Pakistanis.

However, these are strange times. Mr. Sharif and Mr. Zardari should never have agreed to share power. But Pakistan is in emergency ward (sotospeak) and there are immediate goals to obtain: Mr. Musharraf to be disposed; the army to be disciplined; the terrorism to be countered. So, it’s OK for the rivals to shake hands. But once the sky clears, it would be wise for both PPP and PML(N) to part ways.

"Joy of voting and sorrow of hopelessness" is the story of Pakistan.It will be difficult to carry on for both of them together.So it would not be boring if it remained a democracy .It would be interesting even if Mr Kiani sabtages it once again.Also where would Musharaf settle can be a good point of satta in Ahmedabed.