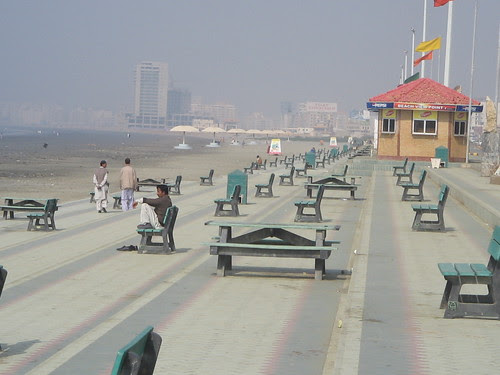 The best-selling author has finally fallen for the country.

Mr. William Dalrymple, a fellow Delhiwalla, traveled to Pakistan in February, 2008. I first went there in 2006. At that time I had very ‘Indian’ views about Pakistan (fundamentalists, terrorists, enemies…) and had to quickly revamp them as I continued traveling in the country. The result was this blogsite Pakistan Paindabad.

Like me, Mr. Dalrymple too traveled on the road from Lahore to Karachi. Instead of launching a dedicated blog, Mr. Dalrymple ended up writing this piece – Long Road to Freedom, Finally. Here are a few quotes lifted from Mr. Dalrymple’s story which proves the points made by this blogsite since its creation in 2006.

The country I saw last week on a long road trip from Lahore down through rural Sindh to Karachi was very far from a failed State. Nor was it anything even approaching “the most dangerous country in the world… almost beyond repair” as the Spectator (among many others) recently suggested. Instead, as you travel around Pakistan today you can see the effects of the recent economic boom everywhere…

Young people are speaking and dressing differently. The Vagina Monologues was recently performed on stage in Pakistan to standing ovations.

The cities of Pakistan, in particular, are fast changing beyond recognition. As in India, there is a burgeoning Pakistani fashion scene full of ambitious gay designers and some amazingly beautiful models.

There are also remarkable things happening in the world of books: as well as a fine crop of major non-fiction writers — Ahmed Rashid, Zahid Hussain and Ayesha Siddiqa at the front of the pack — there has been an amazing renaissance in English-language fiction, with fine writers like Kamila Shamsie, Nadeem Aslam, Daniyal Mueenuddin, Moni Mohsin, Ali Sethi and especially this year’s Booker short-listee, Mohsin Hamid, all for the first time giving their Indian counterparts a run for their money.

The Pakistani economy may currently be in difficulties, with fast rising inflation and shortages of gas, electricity and flour; but between 2002 and 2006, it had been growing almost as strongly as that of India. For five years, until the beginning of 2007, Pakistan enjoyed a construction and consumer boom, with growth approaching 8 percent and what was briefly the fastest-rising stock market in Asia.

By and large, the countryside I passed through was calm and beautiful, and not obviously less prosperous-looking than rural India. Indeed, the transport infrastructure of the country is in many ways better than India’s: Pakistan still has the best airports, motorway and road network in the region. Driving last week along the dual carriageways of Sindh, a week after bumping through rural Rajasthan, there was no comparison between the roads on either side of the border.

Rural Pak too is Hopeful

The Punjab is the most developed part of rural Pakistan; but even in backward Sindh there are signs of change.

That's why I say - Pakistan Paindabad!
Posted by Mayank Austen Soofi at 2:36 AM

While I appreicate your genuine wish to make Indo-Pak ties better, do not forget the freedom and apparently liberal nature of india that gave you the power to write about Pakistan. There are many people as I am give to understand, there also. But India is open to the prying eyes of western jouranlists who some times have frog in the well view of the world. India has many features which our neighbour has a long way to aspire to learn. I beg not to get swept away and always be fair in your assessment.

While I appreicate your genuine wish to make Indo-Pak ties better, do not forget the freedom and apparently liberal nature of india that gave you the power to write about Pakistan. There are also many people as I am give to understand,who are poor in Pakistan.

But India is open to the prying eyes of western jouranlists who some times have frog in the well view of the world. India has many features which our neighbour has a long way to aspire to learn. I beg not to get swept away and always be fair in your assessment. There are may issues including terror that need to be addressed.

Ayibar said...
This comment has been removed by the author.
9:07 PM

jay
Ms. Rabiya,
you are so biased. you have raised the question of freedom and freedom of Indian Muslims. I know a lot of people in Pakistan has such views about India and also a lot of indian has such thought about Pakistan but they don't know the reality. They are illiterate one. One expect more mature views from your side. You say in india no where Muslims get proper recognisation. It shows the standard of your IQ. work over this. Thanks.
jay

Such a beautiful effort this really is. Being on faaaar left from the traditional views and actually trying to portray an image, which might educate all of us better, is really commendable.

Regarding previous posts, We the indo-pak people have been played around by the extreme views on both sides of the border, don't know that much about India, but in Pakistan it ws huge.

Our pride in being Pakistani was sometimes synonymous with being an anti-indian. The 80's and 90's generation was worst hit. One government owned tv channel funneling out anti-india, anti-hindu sentiments regularly.

The common alternative source of entertainment, smuggled VHS bollywood flicks were filled with the otherwise.

But recently, surprisingly so after BJP's Govt. in India & Military rule in Pakistan, things have started to ease out.

Less and less Indian films with anti Pakistan propoganda, & even lesser anti-India sentiments in the 50 plus Pakistani TV channels. People have come to realize that hate culture is not the way forward to go. Though far from such affection for across the border folks, as PakistanPaindabad shows, but things are moving ahead positively.

When Jammat-i-Islami and Pakistani Maulana's are not airing anti-Indian sentiments, when PM or President is not playing the 'Indian' card anymore, when TV,papers, blogs have nuetral stance towards India, it definitely means things are getting humane, and once can hope for the best.

with PakistanPaindabad, the blog owner has gone a step ahead of any other counterpart on this side of the border and has put the 'Indians' in lead :), I wonder when will it be reciprocated from Pakistan's side. Good work, bravo!

life is too big and beautiful, and I believe that we can all live together in piece.
we should have more dialog between us, we should be able to look at our differences in another level.
I notice the anti-pakistan sentiment aired in movies and television has come down so much which is a good sign.
I hope some one will make a " peace" film on india and pakistan.

has anybody seen a movie called
" Hotaru no Haka" its a japanese animated movie, and believe me, air it in schools and public places, we may see less violence after that.

The Indian media needs to change their attitude against the muslims. No media in India or books want to give credit to muslims achievements. Always there is an attempt to project muslims as backward, terrorists or illeterate to the community who had ruled the country for more than 1000 years. In the case of Pakistan, Indian media does not recognise it as a soverign, progressive, developing country where as the media in the west and even in China had recognised that Pakistan had made progress in many fields.

Mr. shoaib,
My question is to you is, why are you biased? I wonder what you read so you are making such comments about indian Media. I cann't deny the fact that some medias specially some hindi and many urdu newapaper's credibility are questionable but overall the Indian media's record about secularism is proven. I would be very glad if you start subscribing nespapers and monthly magzine like The Hindu, The Hinduastan Times,The times of India, India Today, Outlook. Go through these papers for atleast 3 months then we will talk about Indian Media and its biasness.
thanks.
jay

well I haven't been to Indian, wish I could atleast once in my lifetime.

I agree with jay regarding the well established Indian NewsPapers i.e. Hindustan Times, I subscribe to a few online, have for years now, and I agree they have shown commitment to secularism.

So is true for newspapers i.e. DAWN, The Friday Times, Daily Times in Pakistan.

But the issue lies with some of the well established second string newspapers in both cuntries.

Nowadays, since there is cross media, i.e. a newspaper owning a TV channel, the policies of newspapers are reflective in their TV coverage.

That is when right-wing papers/TV channels put things in worse shape. I have seen Indian news channels coverage of Mumbai attacks, and seen a variety of stances.

Similar is the case here, TV channels ascribe to press stances of far-right wing and liberalism.

Its always the case, that right wingers thumping hate ideology have more chance to penetrate then some sensible liberal channels, paper