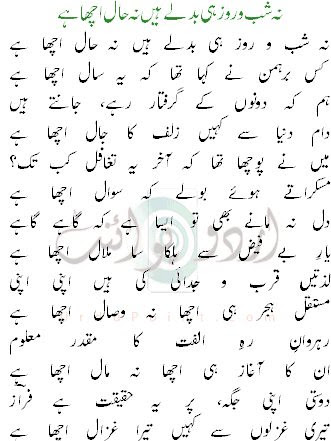 The homesick diaspora has online Urdu as refuge.

The popularity of Internet as a medium and the personal space it provides to the diaspora is evident from the growing number of Urdu related websites outside Pakistan.

Take the Europe-based Iqbal Academy. That Iqbal is being seriously debated or even considered relevant and that too abroad is quite encouraging.

Iqbal Study Group was formed by young Muslim students of various universities in Copenhagen. They sought our patronage, to which we agreed. Since then we have been helping them to know Iqbal as much as possible and attending their each and every session. During the month of November 2005 two historic events were organized by us, in which The Director Iqbal Academy Pakistan personally participated. His report in Urdu published in Pakistan and Denmark.

Iqbal Academy Scandinavia was formed in 2002 and formally inaugurated on 30th, August, 2003.

There is another news-site Inqelaab. Based in Italy, Inqelaab brings together news from Pakistan as well as Europe (on Pakistanis there).

And news from the Gujrat district in the centre of Punjab province are carried by Gujratlink. Given that most of the Pakistanis in Norway are from a particular sub-district of Gujrat, this is not surprising. There is surely a readership, I suspect a thriving one.

Finally the London based Al-Qamar, edited by a well known writer Safdar Hamdani. On this site, Safdar Hamdani writes a column on various issues and I trust has a wide readership on the Internet.

The disaspora is reinventing its nostalgia for Pakistan. Instead of the old-world elegies of separation, it has learnt to use the Internet for a creative celebration of its dual identity.

P.S. Totally unrelated, but the readers might like to visit this link to a Lucknow-based Urdu e-newspaper called Lashkar.
Posted by Mayank Austen Soofi at 3:52 AM

This is news-site reading urdu outside pakistan.
so basically the idea of this site is to acknowledge urdu reading like poetries,urdu stories etc outside pakistan, so people will get benefit from it.
http://urdureading.com/