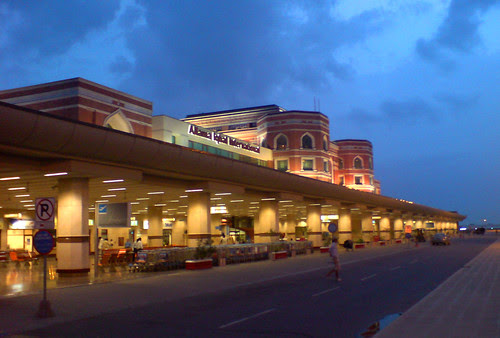 When an Indian goes to Lahore with excess baggage.

[By Rakhshanda Jalil; a resident of Delhi, she recently edited neither night nor day, a collection of 13 stories by women writers from Pakistan; picture of the Allama Iqbal International Airport by Manitoon]

My first trip to Pakistan, in March, 2007, began with the usual excess baggage -- usual, that is, for most Indian Muslims who set out for Pakistan carrying their nationalism on their sleeve even as they totter under the weight of an indefinable deja vu.

This sense of seeming familiarity with everything in a country one is going to step foot in for the first time is uncanny. Virtually from the moment you step into the PIA aircraft in Delhi -- no, even before that, actually, when the PIA security person says 'Assalam-alekum' as she does a thorough body search -- this sense of the familiar and the known grows.

Lahore airport could pass of as an airport in any Indian city except for two things -- it is a lot cleaner and modern, and that distinct smell of phenyl and stale urine that greets passengers as they step off the tarmac at any Indian airport anywhere in the country is missing here.

But once outside, the air smells the same as Delhi, the trees look familiar as does the chaotic traffic. Rickshaws, pony carts and autos (gaily decorated contraptions that veer crazily all across the road with the same devil-may-care attitude that makes their Indian cousins such a menace on our roads) jostle for space with the latest state-of-the-art dream machines.

Our nifty Maruti Suzuki is equally ubiquitous there as it is here -- with one small difference of having dropped the 'Maruti' from its derriere. What takes some getting used to, however, is that everyone is dressed in salwar suits -- even the men!

I spend the next few days making several discoveries about the said garment: (a) in this Land of the Pure, its tailoring has been elevated to an exact science, comparable only with astronomy or rocket science, and (b) it comes in a seemingly endless variety of styles and shapes -- loose or fitted, billowing or snug, long or cropped, plain or profusely embellished -- the variety within the sameness making it mind-boggling.

The same applies to Pakistan -- as I would discover in the course of the next seven days while I travelled from Lahore to Sargodha, Faisalabad and back to Lahore to catch the flight home.

Muhammad Ali Jinnah's dream of a people united under Islam, leaving in peace and harmony as part of a pan-Islamic brotherhood is just that -- a dream. While it is true, I stayed within the province of Punjab and did not get the opportunity to visit Karachi and Islamabad which are considered far more cosmopolitan, I was struck by the regional, ethnic, linguistic differences and the pride people take in their distinctness -- be it of food, dress, language, idiom, custom.

The stereotype of monolithic Islam -- so often trotted out for Indian Muslims -- is as untrue for Pakistan as it is for India. I met people of various inclinations and denominations -- Shia, Sunni, liberal, fanatic, tolerant, intolerant, Wahabi, Hanafi...

While I came back loaded with salwar suits, I had no excess baggage on my return trip. I found I had shed most of it as I realised a shared past and shared histories give more occasions for persistent deja vu than shared religion.

(Ms. Rakhshanda Jalil read a paper on "The Events of 1857 as reflected in the Poetry and letters of Mirza Ghalib" at the University of Sargodha, and on "Society, Culture and Literature" at GC University, Lahore.)
Posted by Mayank Austen Soofi at 2:16 AM

awwwwww that 's soo sweet..pakistan does have a lot of diversity amongst its own people which is a great thing, we try to celebrate our difference and acknowledge the fact that we're all different :]
I LUV PAKISTAN..
dil dil pakistan ;) lol
im glad this woman had a great time in lahore..too bad she didn't see karachi,though!..she would embrace karachi more than any of her huge cities,it's less populated!

"Pakistan Paindabad - Long Live Pakistan." I fully agree with your Blog's title as every movie needs a bad a guy (villian) who makes everyone's life miserable. Without this bad guy Hollywood, Bollywood and Lollywoods cannot think about making a movie. So, long live this baddie.

Do any one explored Pakistan's real history?
I mean the history what can be SEEN and explored and NOT the one told in text books.
Did any one know what is Taxila, Gandhara and Mauryans?
Do any one know that Vedic Civilization started in Pakistan.
How long people live in denying mode?

I'm going to Pakistan soon. My airline allows me to take 30kg on the way there but only 20kg on the way back which kind of puts a dent in my shopping plans. Anyone have any ideas or tips on how I can bring back more than my allocated allowance?
Do you think if I tipped one of the porters a bit extra they could get any excess baggage checked through without any inconvenience?