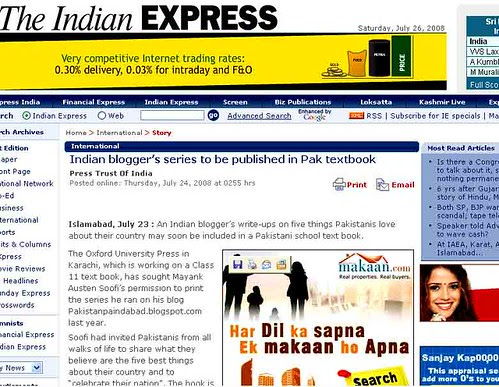 This blogsite has reached a milestone.

An Indian blogger’s write-ups on five things Pakistanis love about their country may soon be included in a Pakistani school text book.

The Oxford University Press in Karachi, which is working on a Class 11 text book, has sought Mayank Austen Soofi’s permission to print the series he ran on his blog Pakistanpaindabad.blogspot.com last year.

Soofi had invited Pakistanis from all walks of life to share what they believe are the five best things about their country and to “celebrate their nation”. The book is also expected to include Soofi’s picture and he is elated.

“It feels good to be published in a Pakistani text book,” Soofi said.

“This textbook follows the 2006 National Curriculum and material in your blog covers theme on patriotism,” Ray wrote.

“As Pakistan hits headlines around the world, the news all seems bad. From disaster in the World Cup, to poor Bob Woolmer’s death, to the recent bloodbath in Karachi, it seems that Pakistan is the source of much of the nastiness in a nasty world,” Husain wrote.

“But we Pakistanis have become so used to the succession of bad news that we have come to take each fresh crisis in our stride. In fact, it is this resilience in face of so much adversity (mostly self-created), that is one of the things I am most proud of.”

Pakistanis' "puzzling adherence to democracy" and "millions of meat-eaters" in his list. "So despite all troubles Pakistan is beset with, I don't think I would trade places with anybody," he wrote.

"We cook dishes like biryani, karhai, pilau etc in weddings and birthdays. Our famous doodhpatti chai, of course, is the most delicious thing on earth," Nahal wrote.

Karachi-based photojournalist Ameer Hamza mentioned Pakistani politics and girls as his top five favourites. "And yes, we have some of the finest girls in the world. But ahem, the rest of the world is also full of them," Hamza wrote.

Daily Times' Washington-based correspondent Khalid Hasan listed Pakistan's mysticism, music, poetry, food and writing as his favourites. Some others listed "cricket" as the best thing about Pakistan "we've produced some of the greatest players ever" read a post.

But not everyone could add to the list. Saeeda Diep, a Lahore-based peace activist, wrote "Is there anything beautiful about Pakistan?"

"A country whose people have not been able to get rid of military dictatorship, a culture which is severely ridden with religious intolerance, a justice system which turns a blind eye to harassment of minorities, a flawed society which has its fabric torn by an unequal distribution of wealth, could have nothing beautiful about it," Diep wrote in her article which was incidentally the first in the series.

"Perhaps, the one and the only thing that makes me a proud Pakistani is that we are the best in hospitality... Please accept my apologies," Diep wrote.
Posted by Mayank Austen Soofi at 5:17 PM 1 comment:

Series - 50 Pakistani Destinations Before You Die 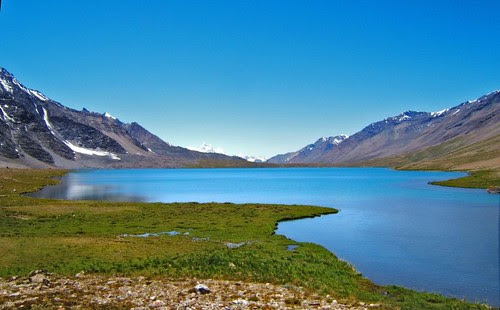 Your guide to beautiful Pakistan.

One evening while browsing in a bookshop, I picked up the New York Times #1 bestseller titled 1,000 Places To See Before You Die. Compiled by travel writer Patricia Schultz, the attractive volume promised “1,000 places guaranteed to give travelers the shivers”. The Newsweek magazine blurb described it as a book “that tell you what’s beautiful, what’s fun and what’s just unforgettable—everywhere on earth.”

But there was no Pakistan in this 974-page bestseller.

No, South Asia was not ignored. India shined through the backwaters of Kerala to the temples of Khajuraho to Taj Mahal. Nepal was noticed for Mt. Everest and Kathmandu’s picturesque Durbar Square. Sri Lanka was praised for Colombo’s Galle Face hotel. Even the tiny Bhutan was not ignored.

No ruins of Taxila. No winding highways of Karakoram. No sufi shrines of Sindh. No train ride to Khyber. No story tellers’ street of Peshawar. No rugged landscape of Baluchistan. No Badshahi Masjid of Lahore. Not even Lonely Planet-esque Nanga Parbat.

Pity the readers of this book. We Pakistanis, however, need not worry. Pakistan Paindabad is happy to introduce 50 Pakistani Destinations Before You Die. This series would take readers to all that is beautiful and fantastic about this country. Readers are requested to send their choices. Pakistan Paindabad.
Posted by Mayank Austen Soofi at 10:47 AM 7 comments: