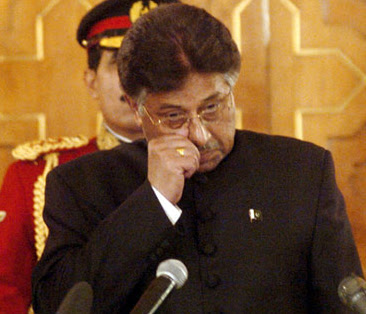 In a long drawn-out televised death scene that reminded viewers of Amitabh Bachchan’s last moments in the film Muqaddar ka Sikandar, a moist-eyed Mr Musharraf said, “I am sad that Pakistan is going down fast.”

That could as well be his legacy to the country he describes as “my love.”

Born in the fall of 1999, in a PIA flight somewhere between Karachi and Colombo, Mr Musharraf was a man who could have become Pakistan’s Lee Kwan Yew, the Singapore statesman whom he claims to be very impressed with.

He could have been. In the begining, Mr Mushararf's world was full of possibilities. When he took over the reigns of Pakistan, the country’s economy had collapsed, the corruption had invaded all walks of life, the politicians had jettisoned all pretensions of responsibility, the wealthy had dispatched their children to West, the Shariat was voted as the state law and the nation itself was on the verge of being declared a terrorist state...a failed state.

Amid such tidings, Mr Musharraf’s military takeover was marketed in the world as a feel-good coup. Indeed, there was a sigh of relief in the country. Mr Mushararf talked sense: he promised to punish the wayward politicians, set the economy back in business, re-strengthen the sense of Pakistani identity and then return home to barracks.

But the script went haywire. 9/11 happened. Pakistan’s General became America’s General. Mr Musharraf who should have led his own war against home grown terrorists instead made the great Pakistan army a B-team of George Bush’s happy-to-bomb-anywhere battalion.

The plot only worsened.

Continued army rule. Unrest in Baluchistan. Strange disappearances of people (presumably by ISI). In the Line of Fire, Mr Musharraf’s shameful memoir. Increase in terrorist attacks in the country. The rise of Pakistani Taliban. Finally, the big blot during the dictator’s watch: Ms Benazir Bhutto’s assassination. And the bigger blot: Getting a foreign agency -- Scotland Yard -- to investigate the death of the country's former prime minister.

What could have been more humiliating for any self-respecting Pakistani like Mr Musharraf?

Yet, there are many who might look back upon Musharraf years with a little fondness. It is said that the dictator was better than other dictators, perhaps better than some democratically elected prime ministers too. Pakistanis enjoyed a comparatively free media than they had ever before. There was marked improvement in relations with India. Besides, for nine years, Mr Musharraf single-handedly, with his brash devil-may-care attitude, made Pakistan a household name throughout the world.

In his own fashion, itmustbesaid, the late dictator loved his country. His son, Bilal, was named for a close friend who had died in the 1971 war. But Mr Musharraf won’t be missed.
Posted by Mayank Austen Soofi at 12:27 AM

Pakistan is free from dictatorship. We're rejoicing after long long 8 years. Mushy never gave a damn about our country and the image of a whiskey drinker womaniser fits perfect. Which president is honest when he cheats his own family? At least Clinton apologised to his family and his country with the Lewinsky affair, Mushy is a coward. What about the affair he had with Lahore actress Faryal Gohar? It was a public thing and none apologised for the wrongdoing. Heck it if Mushy were not a president, who cares what he does in his private life but here was a president and cheating on his family. Shame. Now no country wants him, his family should also give him the boot.This is shameful.
We're optimistic for the demovracy we've waited and our hope was our great Benazir Bhutto now let's see what happens.
Love your blog. Pakistan Paindabad Soofi.

what is going to do now? stock up with his Johny Walker and drown his failures with his women. Dude was seeing ex wife of Jamal Shah, think her name is feryal gauhar. she only supported his ideology and thought of him as her "mentor".

PPP is going to sweep off Pakistan. Inshallah.

the dictator beast is gone.

this is my first time on site and it's done well. Mayank, you Muslim? will visit again.

Is he crying in the photo? Crocodile tears?? Game is over Musharraf.

What about the UN position he secured for to his beloved of that time? Where was justice to the women who were already working in the Government and couldn't he find anyone there? Pervez Musharraf was a liar and took advantage of his position. The Mehbooba mentioned in the comments should learn a lesson with these men. Interesting thing is that I heard her lecture about women and empowerment and about women in media and image but what hypocriscy. Faryal was talking about the image of women in media but she should practice what she preaches. Mushy deserves what he got. I hate people with such sides. Preach one thing do another. BB was best for Pakistan. May Allah rest her soul in peace.
Thanks for the article and you made me laugh with the Amitabh scene.

Soofi Austen bro, nicely written. Yes he died age 8. Too bad because he had many chances to do best. It's the Judicial revoking that got him out. I'm in Sindh and everyone is still celebrating the resignation. Even the mithaai shops near our house seems to be running out of the sweets. Send some over Austen.

zafar, man, if i had feryal gauhar to have a drink or two with, i wouldn't mind being the president. just kidding. she's an aunty yaar.

Musharraf out, who's in?

mayank, just a small thing, don't say the president is dead. as much as i hate that man, becareful how you write your sentences for your own good friend. Okay. salaam

Back on 1 August, Bina Shah thoughtfully penned: He misses when trying his hand at more sophisticated writing: some of his satires fall flat, others are cringe-worthy...

Yeah, what she said.

Great obituary buddy. He has been a better CEo than a prez of a nation.

Mayank : You wrote a fine obituary. As regards the "Kut`baa" or the Marble Stone beside the grave that contains the name, date of birth and date of death may i venture to suggest an apt line by Ghalib :

But seriously, Pakistan faces some very daunting challenges. It is nearly a failed state. The economy is in a tailspin. And it suffers from an appalling leadership deficit.

How Pakistan will dig itself out of this hole is anyone's guess. However, IMHO India could be somewhat more magnanimous in its dealings with its large neighbor. Indeed, India's claim to superpower status will never hold water as long as long as every single country in South Asia is teetering on the edge of a political abyss.

We have rid ourselves of a benevolent dictator only to democratically elect criminals.

Dear God, save my country.

Whole of Pakistan appears to be saying:

When will this 'Rona' end in our dear neighbour.They are going to have Mr 10% as president.What a pity.Please look at CV of our prime minister in INDIA and also of former president Abdul Kalaam.
Show to Mr 19% he will go back to Scotland.
I pity the people who may have to suffer adouble whammy-Miyan and Bade Miyan Mr 10%.Let us join the nations back.Pak army can learn from Indian army how to remain in barracks and our plpoliticians can have adekho at 'Gauhar jaan'.
Rab rakha!!!

Poor Mushy. Think Feryal Gauhar has left him after a long swing of affair. Man has nothing left and should leave Pakistan. He's ruined our country and brought shame. What Islam does he follow? whisky and women. Saleh 8 saal rule kiya and took us all down.

feryal gauhar is a long lost actress and pervez is a desperado. yes the role models of our beloved country. shaheed benazir is missed. soofi here your article is better than the one at delhiwalla.
Sanaullah

Oh for God's sake, Feryal Gauhar and Musharraf are just a pack of lies. Especially with the women commentors above, is this the way to treat an intelligent woman? Or are you all so insecure at your ownselves that you need to find fit in ruining a name of another woman? My friend in Toronto knows Feryal well, and due to her merits, my husband and I have agreed to name our unborn Feryal. One more girl to add history. To those feeble minds, grow up and stop the bashing. use time constructively. As for what the ex General does, thats his business. He may have pursued Ms. Gauhar, but he can wish on!
To my friend, SSD, thank you for suggesting the name for my baby to be.

Mayank, ssd talks fondly of you.

by of course "SSD" would think so. But SSD doesn't live in Pak and so on....Mushy and Feryal had it on. anyway, the article is well written by Soofi

Rajnish, are you advising everyone to follow the example of the Indian army .. who by the way, aren't in their barracks but committing genocide in Kashmir since the last 25 years? The fact that Indian democracy is always compared with Pakistan itself exposes the deplorable state of Indian democracy. As for Pakistan, it's not a democracy. Pakistan is a feudal society and feudalism and democracy are not supposed to co-exist. Pakistan is only officially known as a 'democracy' for the benefit of the international community and for the flow of foreign financial assistance. But India, which seriously tries to parade as the "world's largest democracy" is actually the world' largest fraud and hypocrite. New Dehli doesn't even have the balls to own up that India is NOT a secular state but a hindu fundamentalist state with 900 million ferocious hindu bigots that includes rural and urban Indians - an amalgam of villagers, middle-class urban dwellers, elites, business persons, bollywooders etc. To give a better meaning to its so-called 'democracy,' India must stop its holocaust in Kashmir and allow reporters and human rights groups to freely enter that forbidden zone. India should apolozise to the world for participating in state terrorism Gujrat in 2002 orchestrated by the chief minister of the province that butchered 2,000 plus Muslims and its recent mayhem against the Christians of Orissa and their forced conversions to hinduism. It's high time for that fu*kin country to come out of its shamelessness facade, gather some guts and say that its 'carrot & stick' policy consists of not more than a couple of carrots and tons of sticks for the Indian minority population.

heard mushy wants to return to politics. situation in pak is not so good. at least during mushy's time it didn;t get this bad.
hey is this the feryal ali gauhar the same as the actress? i saw her perform recently and she's now aged. where did zafar hameed learn about mushy and faryal gohar? i wouldn't be so surprised and is this how she came to be some ambassador.
hey austen you should write more on pakistan since i don't see anything written about the recent problems from swat. peace brother