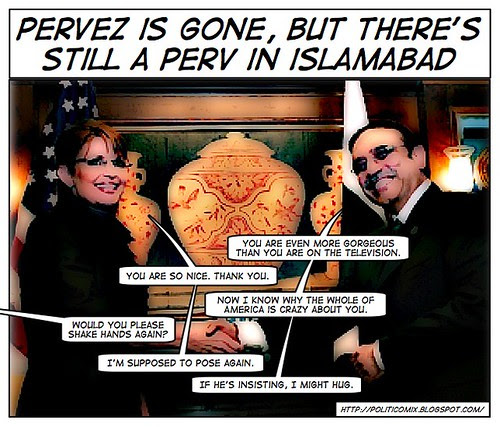 All he wanted was a hug.

Pakistani men, the upper-class English-speaking types, have a “Savile Row-suited gigolo kind of charm.” No, it’s not the official view of Pakistan Paindabad. This was noted by someone close to US Secretary of State Ms Condoleeza Rice as she sat face-to-face with former PM Mr Shaukat Aziz on her virgin trip to Pakistan in 2005.

This was recorded in an otherwise yawn-yawn book titled Twice as Good: Condoleezza Rice and Her Path to Power. The book also noted that Ms Rice was left unimpressed by Mr Aziz’s gigolo-esqe seduction.

Now another suited-booted Pakistani man has tried his luck. President Asif Ali Zardari, the nation’s First Widower, pumped in his macho Feudal Lord rugged-look appeal (but with a trimmed mustache…in keeping with the Savile Row profile?) with another American lady of repute and disrepute.

During a state visit to New York in September, 2008, the First Widower met Momma Palin and yes readers, there indeed was something at first sight, if only from our man’s side.

First, they both shook hands. The moose-hunter who could become America’s dumbest president said she was “honoured” to meet Pakistan’s President. Our Widower, clearly delighted, in a return compliment, which only we Pakistani men could come up with, called her...ahem, “gorgeous”.

Mr Qadari...oh, sorry Zardari (blame Mr McCain) said, “Now I know why the whole of America is crazy about you.” (Ouch!)

“You are so nice,” Momma Palin shot back.

Just then the First Widower’s lackey told the two happy people to keep shaking hands – oh, no hidden motive. For the cameras, you see.

The First Widower, all beaming, said, “If he’s insisting, I might hug.”

At the time of going to the press, Pakistan Paindabad could not confirm whether any hug actually took place.
Posted by Mayank Austen Soofi at 3:05 AM

Had Mr. Zardari hugged Palin, Mullahs of Pakistan (Qazi Hussain Ahmed and Mulana Diesel Fazal) would have declared Zardari harami. And then they would have ordered Zardari to marry her. Then, Palin would have had to get divorced from Mr. Palin, the Moose. Then..... President of Pakistan's susraal would have been in Alaska. Good God.

Let us root for Palin even if we get Republicans.There is some chance of Zardari and palin romance happening.But for that our man has to stay President and alive.It can be a great Alascan wedding.Am I dreaming .It has more chances to happen in one year than chances Zardari had to become President 1 year back.Mullaha conducting it can be left back in Alaska to chill.