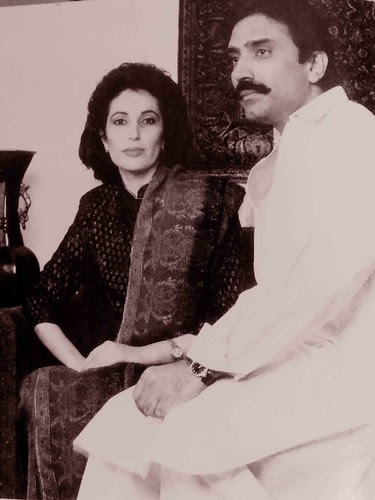 As Mr Asif Zardari, the widower of Ms Benazir Bhutto, becomes the new President of Pakistan, Pakistan Paindabad looks back into his wife’s autobiography, Daughter of Destiny, to find out just how he became Pakistan’s First Husband.

So, here is the story of how Pakistan's most famous woman got attracted to a rich man's son who would, due to his connections to her, would one day lay claim to his nation's top post. In Ms Benazir Bhutto's own words:

Family pressure
My personal life had taken a dramatic turn on July 29, 1987, when I agreed to an arranged marriage on the prompting of my family.

First whispers started earlier
Soon before the family was to gather in Cannes in July 1985, my mother and Auntie Manna approached me with a proposal from the landowning Zardari family on behalf of their son, Asif.

Old crush?
When we were teenagers, he’d watched me enter and leave the movie theater his father owned.

A suitable boy?
Auntie Manna had carefully researched the prospective groom…asking the Zardaris to answer such questions as Asif’s academic qualifications (Petaro Cadet College, the London Centre of Economic and Political Studies), his profession (real estate, agriculture, and the family construction business), his hobbies (swimming, squash, and his own polo team, the Zardari Four), and even whether he liked to read!

The reluctant girl
…but I wasn’t interested. For the first time in nine years, I was enjoying my own country, free to go out and see my friends, to travel, to work. “Just let me enjoy my freedom for a while,” I kept saying.

A woman’s burden
Remaining single would work against me politically both inside and outside Pakistan. In the male chauvinistic society we live in, little thought is given to a man who remains a bachelor. But a single woman is suspect.

Rumors
Someone told me that Asif had taken a bad fall from his polo pony and would limp for the rest of his life. That turned out not to be true…

First meeting
He was wearing glasses, and I couldn’t even see the expressions in his eyes. I didn’t have a single feeling about him at all after the evening ended, even when he sent me a dozen roses the next day.

Beginnings
On the fourth day of the Zardari visit, I took Fathi to Windsor Park while Asif went to a polo match. A bee stung me in my hand. By dinnertime my hand was very swollen. “I’m taking you to the hospital,” Asif told me when he arrived at the flat. He ignored my protests, calling for a car, arranging for the doctor, buying the prescribed medicine. For once I am not in charge, I thought.

It’s settled
“Conscious of my religious obligations and duty to my family, I am pleased to proceed with the marriage proposal accepted by my mother, Begum Nusrat Bhutto,” read the statement I released to the press.

No love, yet
We didn’t really love each other yet, though my mother assured me that love would come later.

The D-Day, December 18 1987
I tried to look demurely down at the ground as I took my place on the wedding dais.

Tasting the blood
Two hundred thousand people danced and cheered at the People’s Reception in Lyari, giving Asif his first taste of the love and support of the masses for the Pakistan’s People Party.
Posted by Mayank Austen Soofi at 9:38 PM