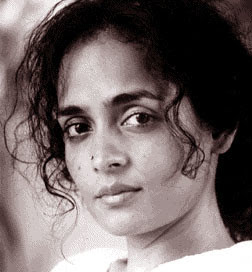 A young Pakistani besotted with an Indian passport holder.

The strongest desire that I harbour is that I meet this wonderful woman in person and let her know how much I revere her.

I heard her name first perhaps when I was in the university. A friend told me that she came to Karachi in April, 2002, for the launch of Najam Sethi-Salmaan Taseer’s Daily Times. I will always regret that I didn’t go to listen to her speech. I did not go because I did not know. I did not know because I was always pre-occupied with (and looking forward to) saying my three-time prayers at the local Shia mosque.

By the time I graduated I had become a liberal. I also remember purchasing Roy’s Booker-winning The God of Small Things from a second-hand books’ dealer. But I returned it the next day since I couldn’t appreciate (or understand) her language. It was only after I got a chance to know about socialism that I, sort of, rediscovered Arundhati Roy.

Just Google “Arundhati Roy interviews” and there comes a dozen or so web links. One by one I read each of them with the glee of a six-year-old. Roy’s sentences are like, as they say, pearls turned into a necklace. She is sharply critical of the exploiting classes and that too with a caustic touch.

For instance, in one of her interviews, she says: “(The Indian state) has a lot to teach the world about how you manage dissent. You just wear people down, you just wait things out. When they want to mow people down, when they want to kill and imprison, they do that, too. Who doesn’t believe that this is a spiritual country where everybody just thinks that if it’s not okay in this life it will be okay in the next life? Yet it is one of the most devastatingly cruel societies. Which other system could dream up the caste system? [It is equally true of Pakistan where caste system is in full action, particularly in rural Sindh and Punjab — Kazim] Even the Taliban can’t come up with the way Indian civilisation has created Dalits.”

Today, the door of the my room has a photograph of Roy along with that of Che Guevara, besides a poster of Faiz Ahmed Faiz’s everlasting poem, “Bol ke lab azad hain tere”.

One couldn’t help but appreciate the beauty of Arundhati Roy. Ignorant friends often confuse her be an actress when they see her photograph in my room. One guy asked me what was the use of her photograph (in which she looks stunningly beautiful) in my room. “If you like her thoughts, why can’t you just admire her by reading more of her stuff,” he asked. “Why put her photograph in your room?”

“Why didn’t you object to Che’s picture that is hanging next to Arundhati’s?,” I shot back. “ Maybe I’m a bisexual and I like men as well as women.”

Just because Arundhati Roy happens to be an elegant woman, besides being a radical intellectual, it shouldn’t mean that I stop being myself. Who should I remove photographs of all those people who I feel closed to?

By the way, the photograph under question is exceptionally well and portrays the natural beauty of Arundhati Roy. Maybe because it has been taken by her husband. He knew the real depths of her beauty and was thus able to bring out the purity and charisma of her sensitive soul.

It is people like Arundhati Roy who make the world a livable place. I wish we had a few like her in Pakistan, too — but alas, we have none.
Posted by Mayank Austen Soofi at 7:33 AM

Quite creepy, I must say.

Why does liberalism have to depend so much on personality cults, I wonder?

From Marx to Stalin to Jyoti Basu and now Arundhati Roy.

Sigh! When will people learn to think freely?

too ridiculous, there are a lot of people who are trying to reform the system in India, today 'Insha'Allah' everything has almost been more or less gone. I must say, today that's just a word which people like you, ignorant of Indian social system work do use as a last resort.

I must tell you one more thing, neither you nor me whose ancestors have moved away from that due to the lacked of guts to reform it moved away from it; and so is Arundathi who is trying to get some media coverage for herself.

"You only hear what you want to find soothing to hear!!!"

There are many who claim to have seen god. But no one can explain or have the right words to explain what he/she/it looks like.

"It is people like Arundhati Roy who make the world a livable place. I wish we had a few like her in Pakistan, too — but alas, we have none."

We had Eqbal Ahmed. He spoke out against the Pakistan military regime during the 1971 civil war - he was like our Chomsky. But I agree the world needs more people like her, people who put the cause of humanity before everything else.

Individuals like Ahmed, Chomsky and Roy are usually branded as being anti national but in my opinion these are the only people who genuinely care about their country and its future.

Btw do read "The Selected Writings of Eqbal Ahmed" when you get the chance.

Was it difficult for you to say, "In love with a Hindu" Sir?

Bruised Indian,
The headline was given by Mayank. And I have no problem in saying what you have suggested. Cool down, dude.

wasim nd chahat
so we awl are one