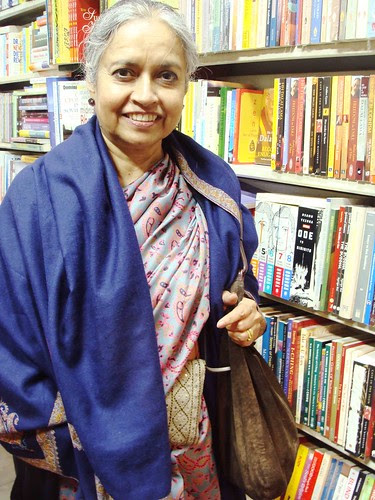 Snooping around a sari-clad Pakistani in the Indian capital

A few hours after Bombay, India's Karachi, came under terrorist attack in December, 2008, a 70-year-old Pakistani artist, sitting thousands of nautical miles away in Karachi, started e-mailing friends in Delhi. She had plans to visit the Indian capital but the Bombay outrage made her pause.

Would it be wise for we Pakistanis to travel to India in these tense times? She feared what if somebody spat on her face? Finally, after "considering all options" she landed in Delhi just before India's Republic Day.

"I came because all my Delhi friends insisted that I should come no matter what," she told me later.

I was one of those friends. I live in New Delhi.

No, Naz Ikramullah is no back-slapping buddy of mine. I first met her only a year ago during her last trip to Delhi. It was love at first sight. Her Sonia Gandhi-esque sarees, grey hair, and sweet smile added extra zing to her inner graciousness, vivacity and elegance. And then she's such a big-time artist. Trained in lithography, Naz's work is scattered all over the globe – Amman, Ottawa, Islamabad, Bombay, Washington DC (Library of Congress!) and Delhi. She herself divides time in Karachi (winter) and Ottawa (summer).

Yet Naz is a rare specie – a naturally modest person with a kind of genetic je ne sa quoi that comes only with a lineage as impressive as hers. Her father was Pakistan's first foreign secretary. Her mother was an ambassador who was posthumously awarded with Nishan-i-Imtiaz. One of her uncles was Pakistan's prime minister; the other was India's vice-President. If you are a sucker for who-is-who, you better know that her sister is a Jordanian princess.

The real meat comes now. In a time when Indians and Pakistanis are not daring to cross the border unless they happen to be peacenik pros, Naz came to Delhi just to... well, hang out.

Not long ago her bag was snatched outside a Karachi bakery at gunpoint, and then the Bombay tragedy made her distraught. The poor dear needed this break. So, here was Naz flitting around in her cozy Delhi – Shanti Niketan, Lodhi Estate, Mehrauli, Khan Market, Maharani Bagh, Nizamuddin East...

Like a native in a native city. After all, Delhi is her home, too. Passport notwithstanding.

It was in Delhi that she spent her childhood. Here she went to the kindergarten. Here her parents moved amongst the history makers. (Once her brother told MA Jinnah that "Mr Jinnah, you write good articles in Dawn.")

And then the Partition happened, parents migrated and Naz became a Pakistani.

But this Pakistani refuses to be chained to a single identity. Her personality transcend boundaries. Despite being a two-time emigrant (first to Pakistan, then to Canada), Naz is not rootless. Instead, she has roots everywhere.

Over coffee at Khan Market's Café Turtle, she laid out the family tree – mother from what is now Bangladesh, father from somewhere in Uttar Pradesh, one nephew (or was this cousin?) married into a Jain family in Bombay, her son-in-law a Pakistani Punjabi... then I lost the thread. You may get an idea from this e-mail excerpt:

... no place is safe these days. My nephew (Bangladeshi) has talked of marrying his Nepali girl friend in Phuket...

Naz is truly cosmopolitan. In this short trip, I saw this London-born lady talking to cab-drivers in flawless purabiya, conversing with society queens in perfect angrezi and humoring me with 'What the F' lines.

Too bad good things don't last long. I waved my final goodbye to Naz in Lodhi Estate two evenings before she was to leave for Karachi. When her cab was turning towards the Sai Baba temple, I was suddenly hit by fear. Delhi can't be trusted with beautiful women.
Posted by Mayank Austen Soofi at 3:34 AM