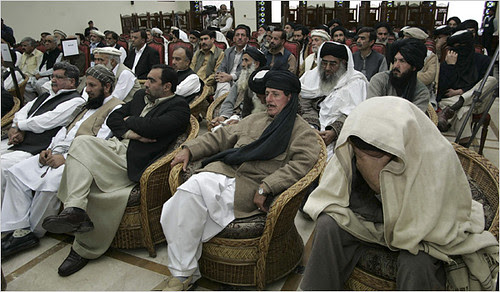 Background of the Swat peace deal.

For the readers of Pakistan Paindabad, I have translated from Urdu a newspaper article by Daily Express columnist Mohammad Amir Khakwani on the Zardari government’s peace deal with the Taliban of Swat. It briefly states the circumstances that made the Pakistan People’s Party (PPP) and the Awami National Party (ANP) give in to the militants’ demands in the scenic valley of Swat.

On Tuesday, Feb 18, the NWFP government signed a peace deal with the Taliban of Swat. According to the deal, the Taliban and the military forces will observe a ceasefire for 10 days in Malakand division (comprising Swat, Dir and Chitral) and Kohistan district of Hazara division. As a result, a Nizam-e-Adl Regulation (Sharia law) will be promulgated by the government and the Tehrik-e-Nifaz-e-Shariat-e-Mohammadi (TNSM) -- led by Maulana Sufi Mohammad -- will apparently be free to implement it in the restive valley.

Maulana Sufi Mohammad established the TNSM in 1992. He demanded that Sharia be implemented in Malakand division. He also issued a fatwa (religious decree) stating that Islam did not allow any sort of democracy and declared the electoral process un-Islamic. In 1994, he staged a sit-in in Malakand along with other TNSM activists and blocked the Peshawar-Mingora Road for seven days, which practically cut off Swat from the rest of the country. The local administration could not tame him and the federal government took notice of the grave situation. At the behest of the then prime minister Benazir Bhutto, Interior Minister Aftab Khan Sherpao initiated the dialogue process with the TNSM, which led to a formal, but cosmetic, enforcement of Sharia law in Malakand division in November 1994.

The whole issue apparently died down till 1998 when furious demands of Maulana Sufi Mohammad compelled the Nawaz Sharif government to issue an amended ordinance for the implementation of sharia. By then, the tentacles of the TNSM had spread as far as Hazara division and Bajour agency (FATA). Then 9/11 happened and Maulana Sufi Mohammad took a few thousand mujahidin to the neighbouring Afghanistan to combat US forces. As the Taliban regime collapsed, these Pakistani mujahidin were either killed or taken hostage by the Northern Alliance. Only some of them were able to return safe and sound.

General Musharraf banned a number of sectarian and jihadi organisations on Jan 15, 2002. The TNSM was one of them. On March 30, 2002, Maulana Sufi Mohammad was arrested from Kurram Agency (FATA) and sent to Dera Ismail Khan Jail on various charges. After spending six years in jail, he was released on April 20, 2008.

During Maulana Sufi Mohammad’s six-year detention, his son-in-law and a member of the now defunct TNSM, Maulvi Fazlullah, emerged as the most prominent militant leader of Swat. His real name is Fazal Hyat. After passing 12th standard from Degree College Saidu Sharif he took admission in Maulana Sufi Mohammad’s madressah “Jamia Mazahir-ul-Islam” in Dir.

During his stay at the madressah, Fazal Hyat married Maulana Sufi Mohammad’s daughter and changed his name to Maulvi Fazlullah. He had accompanied Maulana Sufi Mohammad to Afghanistan and upon his return also served a 17-month sentence in a Pakistani jail. Fazlullah now reinvigorated the TNSM and instead of Dir made Swat its new headquarters. Fazlullah established his own FM radio and in the aftermath of the October 2005 earthquake took part in relief activities with great enthusiasm. This made the TNSM popular among the masses. Now his slogan became ‘Sharia or Martyrdom’.

The insurgency began in Swat after Musharraf government’s operation against Islamabad’s Lal Masjid in 2006 that killed hundreds of young female religious students living within the seminary. After the Lal Masjid operation, General Musharraf decided to weed out Swat militants. On Oct 22, 2007, a military operation was launched in Swat that initially defeated Maulvi Fazlullah-led militants as they lost Matta, Khwaza Khela, Kabal and Charbagh tehsils to the security forces.

Later, companions of Fazlullah changed their strategy and opted for guerrilla warfare against the security forces. Gradually they established close links with Tehrik-e-Taliban Pakistan (TTP) chief Baitullah Mehsud and his deputy in Bajour (FATA) Maulvi Faqir Mohammad. Fazlullah’s organisation became a part of the TTP and by the beginning of 2008 its influence and power had reasonably increased as it had got support of different Taliban groups.

It also wooed members of the suicide bombers’ squad from South Waziristan agency (FATA) to come to Swat and take part in the fight against the security forces. The subsequent incessant suicide attacks on the security forces forced the government to negotiate a deal with the Taliban. In result, Maulana Sufi Muhammad was released on April 20, 2008, hoping that it would pacify the situation but the Maulana soon adopted an indifferent approach towards the whole Swat crisis and left it up to his son-in-law Maulvi Fazlullah.

By the end of 2008, around 90 per cent area of Swat was under control of the Taliban and the security forces were restricted to Mingora city only. Meanwhile, backdoor diplomacy continued between the Taliban and the government despite an unsuccessful peace deal in May 2008. Now Maulana Sufi Mohammad had set up a protest camp in Lower Dir calling for the enforcement of Sharia in Malakand division. The entire area brimmed with terror and fear and that forced the ruling ANP to request Maulana Sufi Mohammad to play a role in restoring peace in Swat.

The breakthrough came when a couple of weeks ago Maulvi Fazlullah agreed to a ceasefire if Nizam-e-Adl (Sharia law) was enforced in Malakand division. He also released, as a goodwill gesture, a Chinese engineer who was abducted eight months ago. That has resulted in a temporary halt in bloodbath after one and a half years.

Apparently peace has been restored in the area. There’s no more bloodshed for now and both the Taliban and the security forces have adopted a wait-and-see policy. Only time will tell if government’s policy of negotiations with the Taliban is right or not.
Posted by Mayank Austen Soofi at 7:28 AM

This is going to end badly.

this will set a precedent for all other Islamic groups to enforce sharia law in all parts of pakistan . My advice to parents of girls is that send your children abroad for their own well being. You can send them to India or Iran, we will take them in with open arms.