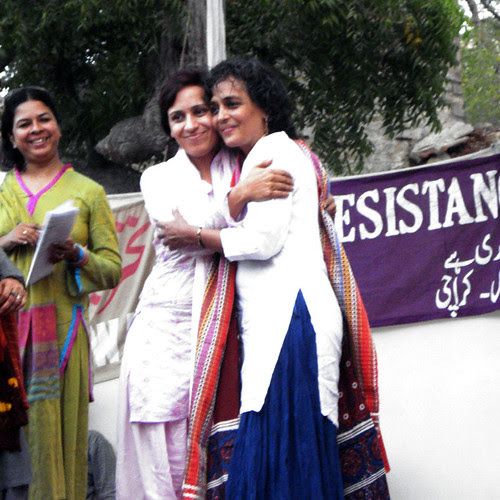 [Text by Kazim Aizaz Alam, picture by Khuda Bux Abro; in the picture you can see Arundhati Roy with Amar Sindhu, a Karachi-based intellectual, writer and activist who has a very strong voice in Sindhi literature. Ms Sindhu teaches philosophy at Sindh University and also represents the Sindh Chapter of Women's Action Forum]

Not only I heard her speak in close proximity but also got her autograph! She was at Karachi Press Club to attend a Women's Action Forum programme against creeping Talibanisation in Pakistan. This is what I can recall from that memoreable evening.

Her dress
She was in a white kurti and blue baggy trousers with a wrinkled blue-white dupatta (this dress is probably called gharara). Going by many photographs of hers (courtesy Mayank Austen Soofi) in which she is in the same kind of dress, one can say that she perhaps feels comfortable in a gharara. If I were a woman I would have started wearing it too.

Her expressions
She was smiling continuously and seemed totally at home among Pakistani civil rights activists.

Her Urdu
She was the last speaker (barring Dawn's India correspondent, Javed Naqvi, who had accompanied Arundhati Roy, in his own words, as a 'travel agent'. Till she got up, the speeches were largely made in urdu. But Arundhati Roy started off in English saying she was sorry that her Urdu wasn't good enough to express her views conveniently. Still she said that for those among the audience who couldn't understand English she would say something interesting in Urdu. Then she told us how amused she was recently by watching the video of a 10-year-old member of the Taliban brigade who said something like this: "Just like the government has banned the use of plastic bags, why can't it impose a similar curb on women in public spaces? Why can't women be simply banned from coming out of their homes?" So in the eyes of the Taliban, Arundhati Roy said, she too was a plastic bag and so were all the women activists present there.

Her twists
She said she considered George Bush a 'Twisted Prophet'. Twisted because unlike a 'normal' prophet who makes a prophecy about future which turns out to be true later on, what Bush did was that he 'designed' the future in a way that it 'fitted' the prophecy he had made.

Her advice
She urged us not to be selective as a protester and stay away from the 'pick-and-choose' syndrome. The pick-and-choose syndrome, she said, was something that would make us take up the issues that 'suited' us as protesters and leave those unaddressed that somehow weren't 'attractive' enough. She cited the example of the urban Indian feminists not coming forward to help the people facing displacement due to the government's plan to build large dams. Displaced women in such cases were the worst victims since they wouldn't get even what the government called 'compensation' which was handed over to men only, she remarked.

Her call
She vociferously called for rejecting the 'either-or' condition. She said we should oppose the Taliban without aligning ourselves with imperialism. Opposition to the Taliban should not mean joining hands with imperialism, she stated. She held that the Taliban in Pakistan were like the Maoists in India. Give a dog a bad name and hang him. In India, children are killed and then their extra-judicial killing is justified in the name of combating the Maoists – just like what is happening in Pakistan in case of the Taliban.

Her job
"My job is not to make people comfortable," said Arundhati Roy, whose views were clearly in contrast with those held by the Women's Action Forum as far as confronting the Taliban was concerned. She said she was considered a 'Desh Drohi' in India, which probably means a traitor.

Her surprise visit
She told the audience that she planned to visit Pakistan (Lahore) for an Eqbal Ahmad lecture along with Noam Chomsky. For some reason, Chomsky had to cancel his visit so the Eqbal Ahmad lecture was also postponed indefinitely. Since she already had a valid Pakistani visa she decided to visit Karachi and participate in the demo against the Taliban.

But who's she?
After the conclusion of the programme, I made my way into the crowd surrounding the diminutive Arundhati Roy and sought her autograph which she happily signed. The cheeky, but funny, bit of the evening was that just when I got her signature, an annoyingly stupid person came forward and asked her intensely, "Your good name?" Bewildered, she replied, "Arundhati."
Posted by Mayank Austen Soofi at 7:14 AM 1 comment:

Viewpoint - An Insult to My Pakistan 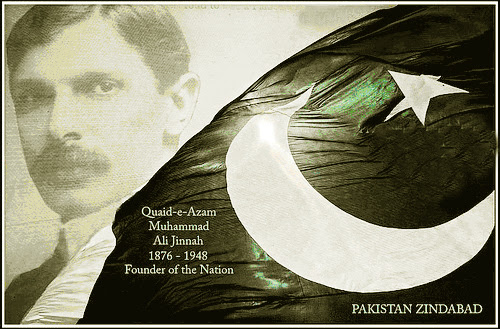 Remember why we created Pakistan.

Eight years ago I boarded a plane to the United States to come to college. I was 17. As I left, my father hugged me and told me to never come back because he believed that soon Pakistan would not be a country fit for me to live in. I told him he was trying to save money by not having to buy me tickets to come home. We laughed it off. I hugged him goodbye and that day my father and I began our great debate about the fate of Pakistan. Abba told me to stay away. I defied him every time. I came home twice a year. I only flew PIA. I refused to do an internship in the US I worked every summer in Pakistan. I moved back when college ended. I started work in Pakistan. I worked two jobs because there was so much to do and not enough time to do it in. I was inspired and energised. I was hopeful and optimistic.

Today I am neither. And I have lost the debate with my father about the fate of Pakistan. The Parliament by endorsing the Nizam-e-Adl Regulation (NAR) has heralded the end of Pakistan as I knew and loved it. Today, the elected representatives of the people turned Pakistan into Talibanistan. Today we handed over a part of the country to them. I wonder how much longer before we surrender it all.

Today we legislated that a group of criminals would be in charge of governing and dispensing justice in a part of Pakistan according to their own obscurantist views. They have declared that the rulings of their courts will be supreme and no other court in the land can challenge them. They have also declared that their men that killed and maimed innocent civilians, waged war against the Pakistani army and blew up girls schools will be exempt from punishment under this law. A law that does not apply equally to all men and women is not worthy of being called a law. Hence today we legislated lawlessness.

What was most disturbing was the quiescence of the Parliament to this legislation. The utter lack of debate and questioning of this ridiculous legislation was appalling. The decision was not informed by any independent research or expert testimony, and to my knowledge none of the parliamentarians are authorities on matters of security, rule of law or regional conditions in Swat. This signals disturbing possibilities. Either our politicians are too afraid to stand up to criminals or maybe they don't possess the foresight to gauge the national impact of this action. There is no hope for a country led by cowards or fools.

How can one be hopeful about the political future of a country where the will and the wisdom of politicians becomes hostage to the threats of barbarians? How can I be optimistic about a country where doyens of the media like Ansar Abbasi hear the collective silence of the parliamentarians as the resounding support of the people of Pakistan, but are deaf to the threats issued by the Taliban to anyone opposing the legislation? How can I feel secure in a country where the army, despite receiving the largest chunk of our resources, cannot defeat a bunch of thugs? How can I expect justice when there are different laws for different citizens, and I as a woman am a second class citizen? How can I be inspired by a country where there is no culture, no music, no art, no poetry and no innovative thought?

How can I be expected to return to a country where women are beaten and flogged publicly, where my daughters will not be allowed to go to school, where my sisters will die of common diseases because male doctors cannot see them? How can I be expected to call that country home that denies me the rights given me by my Constitution and religion? I refuse to live in a country where women like me are forced to rot behind the four walls of their homes and not allowed to use their education to benefit the nation. By endorsing the NAR and giving in to the Taliban, Parliament has sapped my hope and optimism. Parliament has dealt a deathly blow to the aspirations of the millions of young Pakistanis who struggle within and outside the country, fuelled by sheer patriotism, for a peaceful, prosperous and progressive Pakistan.

When there is no hope, no optimism, no security, no justice, no education, no progress, no culture – there is no Pakistan. Maybe it is because I am the grandchild of immigrants who was raised on stories of hope, patriotism and sacrifice that even in this misery I cannot forget that Pakistan was created to protect the lives, property, culture and future of the Muslims of the Subcontinent. It was not established to be a safe haven for terrorists. We fought so that we could protect the culture of the Muslims of the Subcontinent, not so that we could import the culture of Saudi Arabia. Our ancestors laid down their lives so that the Muslims of the Subcontinent – both men and women - could live in a land free of prejudice, not so that they could be subjected to violent discrimination of the basis of sect and gender.

Maybe it's because I'm competitive and I don't want to lose the debate to my father, maybe I am afraid to lose the only home I have, or maybe because I love Pakistan too much to ever say goodbye – I hope we can remember the reasons why we made Pakistan, and I hope we can stand up to fight for them. I hope we can revive the spirit of national unity of 1947 and lock arms to battle the monster of the Taliban that threatens our existence. Talibanistan is an insult to my Pakistan. I want my country back. Pakistan Paaindabad!

[The writer is pursuing a master's at Princeton University. Earlier, she attended Yale University]
Posted by Mayank Austen Soofi at 10:34 PM 10 comments: