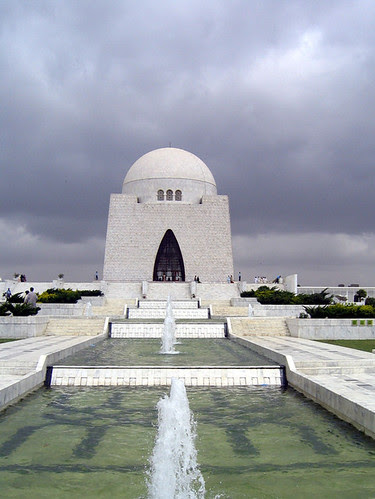 When the tough weather surrendered to the people’s will.

On the late morning of July 18th, 2009, when Mr Kazim Aizaz Alam, a young journalist in Karachi, woke up at his third floor home in the city’s Defence Housing Authority, he found there was no power - as usual. Yet, he could not feel that typical Karachi-esque stickiness. Since the bedroom windows were open, Mr Alam put on his glasses, peered out and discovered the reason behind this unusual pleasantness: it was raining. Karachi was having the first rain of this monsoon season. “I immediately went to break the news to my Abbu but he already knew it,” says Mr Alam.

The showers were not a surprise. There was a hint the day before when the sky was overcast, the weather nippy and the air windy. In quite a few offices, including Mr Alam’s, the shutters were drawn open so that everyone could breathe in the fresh air. Many Karachi-ites were out in the evenings; on their bikes with their women on the backseat. The traffic was heavy towards Sea View, Hawksbay, Sands Pits, Quaid’s mausoleum and Paradise Point. It was a good day for those who sell bhuttas, ice creams and papads on the beaches.

“You know people also go to Nissar park near DCL and to Bagh e ibn Qasim Park, just next to the samandar,” says Mr Kazim. However, there is a rule that doesn’t let people go alone inside these parks. Having a woman by your side is a necessary requirement. Apparently, the logic is that if there are too many single men roaming around, then the few girls who do brave themselves to enter these recreation spots would stop going in. “But we are single,” complains Mr Kazim. “We don’t have girl friends. We want to go out. But we can’t.”

This indeed is a matter of much restlessness for the city’s loners. Mr Muhamamd Haseeb Khan, a young actuarial assistant in a management company, too, is single. His disappointmens are fewer. He has no plans to go to any park to enjoy the mausam’s first baarish. “I like walking in the streets when it rains,” says Mr Khan who lives in Malir, near Quaid-e-Azam Jinnah airport. “The khushboo of the wet earth, the flowing water, the uninhibited happiness of the children abandoning themselves to the elements… all these sounds, smells and sights give me great delight.”

Such monsoon delights are not universally shared. On the morning of the first showers, the website of the newspaper Daily Times reported:
As usual, the first few raindrops caused the electricity to disappear, causing severe suffocation indoors. All the people who could manage to get out of the house, did so, while those who couldn’t, including mostly the women, children and the elderly, suffered at home.

To quite a few Karachiites, there is nothing pleasing about the rain’s aftermath that inevitably results in clogged drains, power failures, flooded highways, stranded traffic. “Yes, it’s raining, the weather is beautiful but the aftermath is generally not pleasant,” says Mr Junaid Zuberi, a marketing professional in a financial services company. “However, it doesn’t normally rain in Karachi and this time the rains have finally come after it has rained everywhere else in the country, so one may as well enjoy the moment.”

Mr Zuberi lives in Defence Housing Authority and he plans to drive around in the rains with his car’s music stereo tuned to Indian classical music. He may also go to the seaside with friends. “I will go to a qawwali in the evening,” he reveals.

Meanwhile Mr Alam enjoyed a breakfast of plain parathas and balai-waali chai in his balcony. “My abbu made both the chai and parathas,” he says. “They were as good as the rains.”
Posted by Mayank Austen Soofi at 12:01 AM