Family Portrait – A Karachi Family in an Indian Mall 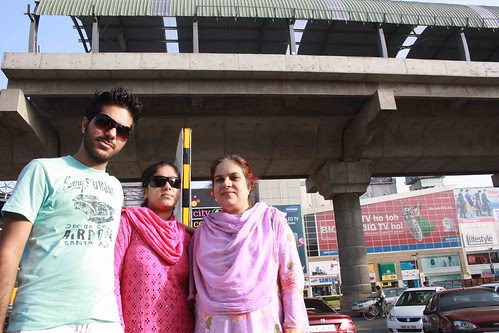 A slice of their Delhi afternoon.

One afternoon I bumped into a Pakistani family in Gurgaon’s Metropolitan Mall. The mother, Fauzia Shakeel, was in Delhi after a gap of 25 years, while daughter, Urfa, and son, Rizwan, had come for the first time. They were staying with Indian relatives but were on their own in the mall.

“There’s nothing like this in Karachi,” exclaimed Rizwan while comparing Gurgaon’s skyline to that of his city. A stylish young man of 24, with gelled hair, he was in a blue T-shirt and white cotton capris. “No, capris are what the girls wear,” Rizwan explained. “This is called three-quarters.” He said it with an authority befitting to what he is - an ambitious fashion designer.

Brought up in Karachi's middle-class Baloch Colony, amidst a family business of cycles' wholesale, Rizwan’s career choice had created ripples. His father, who wanted him to be a banker, was upset. “Pappa said that a fashion designer’s job is not real work,” Rizwan told me while peering into the Swatch showroom. The mother had then stepped in and convinced her husband to let the son do whatever he wanted.

A black sheep in his family, Rizwan was looking exactly that in the mall, while walking between his traditionally dressed mother and sister. In their long-sleeved shalwar suits, both stood out among Delhi’s jeans-clad mallrats.

Rizwan agrees that it demands more hard work when one is trying to carve an identity that is separate from that of the family. Even before he could have completed his graduation from Karachi’s Asian Institute of Fashion Design, he hired a tailor and jumped into the business. The initial orders – almost all were for men’s wear, especially shirts – were from friends. Once they were won over, more orders came from their friends. “We have many good designers in Pakistan but no big fashion houses,” Rizwan said. “And I want to run such an emporium where under one roof you could get a complete range of wedding designs from clothes to cards to jewelry.”

Since the Independence Day was just a week away, the mall was decked with the Indian tricolor. “Mamma, at least get a photo done against their flag,” Rizwan called out to Fauzia. “That’ll be a proof that we were really in India.”

While taking the escalators to the first floor, Fauzia grew nervous. She finds it difficult to maintain balance on these self-automated stairs. “They are there in our Karachi malls also,” she sighed. However, supported by her laughing son and an embarrassed daughter, they landed safely and stopped outside a saree showroom. Rizwan pointed to the embroidery work on a Kanjeeveram silk hanging on the display window. “Every store is offering discounts,” whispered Fauzia. “Yet I can’t see anyone carrying a shopping bag.” Next pause was at a men’s salon where he wondered to get streaks done on his hair. “Our wallet will be emptied in one go,” said the mother. “Things are so expensive in India.”

Later, the family sat down for a meal at Haldiram’s, on the third floor, and ordered for masala dosa. During the wait, Rizwan looked around and said, “In Karachi if we spot a girl in jeans or shorts, we say ‘Wow, it’s an Eid today.’” Sister Urfa smiled. “I saw girls riding scooters here,” she mumbled, and blushed. “In Pakistan, they always sit with both their legs on one side.” The discussion stopped with the dosa's arrival.

“What’s this,” the mother pointed to the crisp layer. “Is that a wrapping?”

Clueless to the world of South Indian cuisine, the three Karachi-ites peered inside the dosa, tapped on its surface, tried to turn it around, and discovered a potato stuffing inside. They referred to sambhar as bhaaji and stared at the white coconut chutney with complicated feelings. Urfa yearned for a KFC burger but the mother said that she could always have that back home. “In other people’s countries, you must try their dishes,” she said.

Picking up the earlier conversation, Rizwan said, “The population in Pakistan which wears short clothes is very small and belongs to a special class.”

A little later when he went to the counter to get himself cold coffee with ice cream, the mother confided to me, “He is working very hard and Inshallah, he’ll be successful in the fashion industry.”

Rizwan sure is promising. In his seventh semester, he had designed a jacked inspired from the works of a Canadian painter called Lena Karpinsky. The artist was so impressed that she created a separate page on Rizwan on her website.

By the time the family walked out, it had grown dark. Having bought nothing, they sat down on a grassy slope and quietly looked at the neon signboards blinking on Gurgaon’s several malls. “Indians have now more money,” the mother said. “We also have these kind of malls but you people are ahead.” They then decided to try out Delhi’s famed metro train the day after. 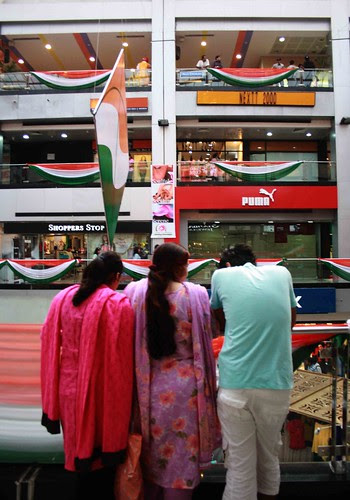 One with the flag 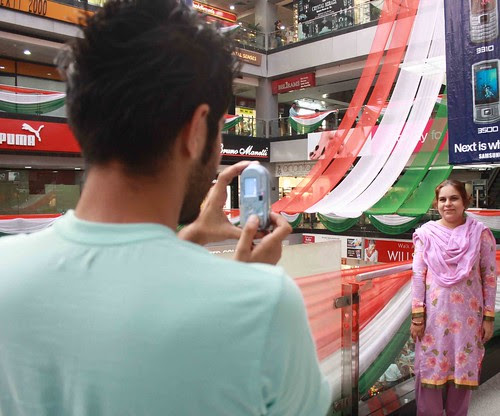 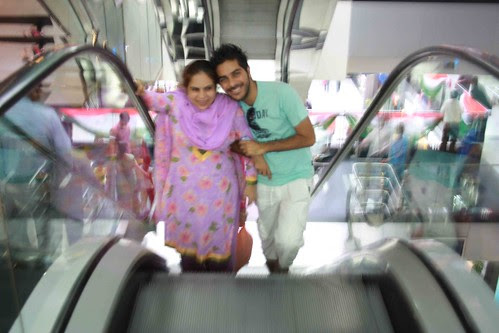 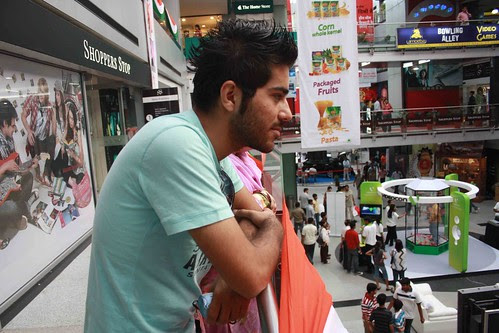 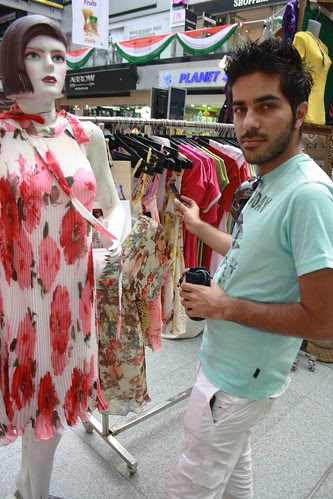 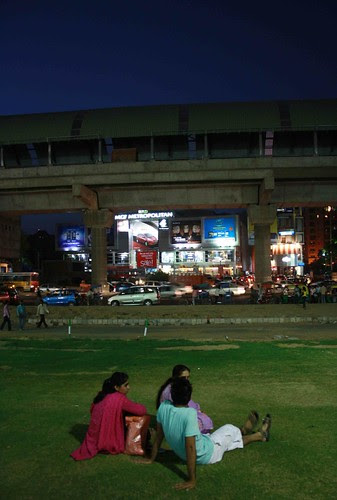 Posted by Mayank Austen Soofi at 12:39 AM

Nice to see normal Indian experience for normal Pakistanis. and also the fact that you avoided the whole Indo-Pak friendship boriyat stuff.

:) they looked to me like how a Indian family looks ...but they are from Pakistan ,that's it, a simple family from pakistan going on a weekend outingin india....so this proves and strengthens the perception that we all were one and are one ,will be one in future to inshallah...its just the war mongers who want to create an divide between our 2 beautiful nations....

Would have loved to see the picture of them eating dosa's

a great way to start the week with a big smile ...after reading this....

nice one
not all indians can afford the malls

great stuff!
got here while looking for razia sultan. and then i realized that you feature in HT!
will follow your work closely now.

These picture are very beautiful. a simple family from Pakistan going on a weekend outing-in India.Thanks for the post.

Time to stop easy visas for Pakistanis, we dont want them here even as tourists.

A nice post covering an important issue. The only remark would be,
you never know what are the requirements for your editor, until you have completed at least a level.

You Are Doing A Great Job Here With Your Blog. Keep It Up..

Aunty-ji's encounter with masala dosa was really funny!!! I hope she dint crack the dosa and threw it n the garbage, cos its too crisp....lol

LumousP...lol i was thinking the same.It is boring at times.All talk no work.