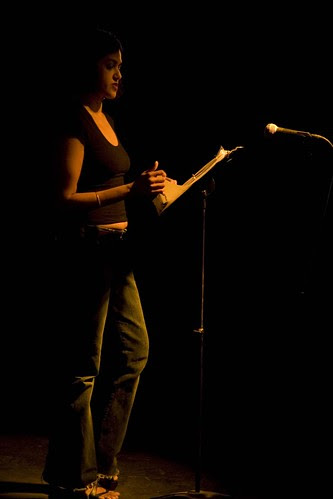 Sehba Sarwar’s first novel, Black Wings, was published in 2004. Presently, besides working on her new novel, she is also the director of a multi-media arts organisation in Houston. There she lives with her husband and daughter. She also has a website. This is the fourth and final part of the interview Ms Sarwar gave to Pakistan Paindabad. You may read the first part here, the second here, the third here. This exclusive feature is an attempt to understand the alternative reality of Pakistan.

Ms Sarwar, you also work for Pakistan Live Broadcast, a video installation project that tries presenting ‘an alternative image of events unfolding in Pakistan’. What is this alternative image?

I'm employed by the arts organization that I founded, Voices Breaking Boundaries (VBB). Through VBB, I'm working on a production that I visualized called Pakistan Live Broadcast. The show premieres in November, 2009 with a new title, Honoring Dissent/ Descent. I'm using footage that I collected about my father - he passed away in May 2009 - and will be honoring his history, his work. I'll also be showcasing an activist in Houston. I did a short piece to kick off the production last fall, and you can see it on my blog Daily Noise. I created this short video piece using a format I call video collage through which I weave together different layers of sound, stills, video and poetry. (I wrote the poem for this piece after seeing an ex-student of mine walk out of a gun show).

In the winter of 2008-09, you travelled in Pakistan? How and what places did you travel?

I mostly stayed in Karachi, but traveled into Sindh to Bhit Shah and Sehwan Sharif. Both were amazing trips, and I plan to use footage from those experiences for the November production. I also flew to Lahore and Islamabad, where I led workshops and several readings.

What new things you noticed in the country?

New things? Mostly that both Lahore and Islamabad felt like war zones, while Karachi felt calm. It was interesting to see that flipped around. But, as you know, things change fast. And hopefully, some of the fear that was affecting Lahore and Islamabad has shifted, now that the situation in Swat is slightly better.

Ok, Ms Sarwar, some final questions. When you close your eyes and think of Karachi, what images do you see?

And when you close your eyes and think of Houston, what do you see?

PS: do edit your blog heading. it should be 'Today Islamabad, Lahore feel....'

I believe what the majority of Pakistanis want. All the cities should have the same security against violenct activities and terrorist attacks as well. The 30 people who dies yesterday we condemn that. No discrimination against provinces or cities. We are ONE country.