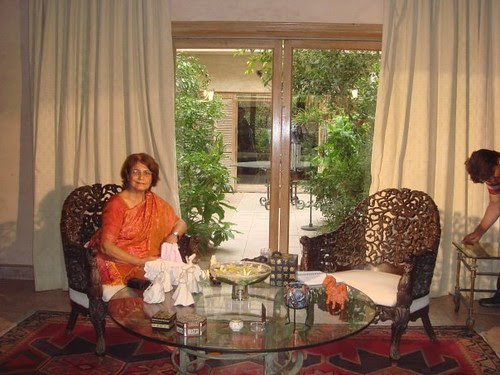 A Karachite’s passion for Hindustani classical.

For the last few years, Pakistan's name has become synonymous with fanaticism, religiosity, Taliban and terrorism. To outsiders, the country may appear as a haven of hate-mongers and terrorists. But all is not wrong.

Amidst the mayhem, some people are trying to keep the colors of life bright and shiny. One such person is Saffia Beyg, affectionately called Saffia Apa. Her sole mission in life is to promote classical music as our cultural and musical heritage.

At 77, Saffia Apa is single-handedly doing what many deem unthinkable. But before I delve into her current passion - Sampurna - let me give you her brief background. Born and brought up in Burma, Saffia was 20 when she married Sa chemical engineer in Bombay. After a few years, the couple moved to Karachi. Saffia Apa's husband joined a private enterprise and she too started working to help the family settle down in the new city. With her Burmese upbringing, Saffia Apa was totally alien to Urdu and Hindustani classical music. However, music was a part and parcel of her life. Heavily into western music, she played guitar and often sang.

It was when Saffia Apa was 40 that she met Ustad Hamid Husain, a well-known sarangi nawaz. His music changed her life. She said adios to western music and started learning Indian classical from her Ustad. Barely three years after she had begun, her Ustad died. However, he had given Saffia Apa enough taste of Hindustani classical for her to find her own way into the world of tals and ragas. Saffia Apa began listening to the great maestros such as Ustad Amir Khan, Parveen Sultana and Ustad Bade Ghulam Ali Khan and improvised her singing on her own. All throughout this period, she kept her search for an Ustad but to no avail.

During Zulfikar Ali Bhutto’s government in the 1970s, Saffia Apa was made in charge of Pakistan Academy of Performing Arts in Karachi that she ran successfully for six to seven years till the Islamist government of General Zia disbanded it. She continued her musical pursuit nevertheless.

In 1999, Saffia Apa formed an organization - Sampurna (seven notes that completes a raaga) - at her home. The idea behind Sampurna was to introduce classical music to Karachi, promote and preserve classical music, musicians and instruments as our artistic heritage and save this art from dying. Quite an uphill task! But Saffia apa is one person who doesn’t believe in giving up.

Since inception, Sampurna has been organizing monthly programs based on classical music. These include vocal recitals, instrumental performances, video presentations, lecture demonstrations, ghazal and qawwali singing and classical dance etc. Through Sampurna, Saffia Apa not only promoted established musicians from Pakistan and India but also gave a platform to lesser-known but talented local musicians whose bread and butter is their music.

Since Sampurna aims at promoting classical music and musicians, Saffia Apa made it a policy to pay every artist well. Using Sampurna's platform, she embarked upon a program of providing sustainable financial aid to deserving artists and their families, focusing specially on the education and health of musicians' children. She coordinated with other organizations like the Infaq Foundation and SAARC Womens Association to help in this program of economic sustenance for the musicians.

Till date, Sampurna has hosted over 120 programs in Karachi, all based on Hindustani classical music. In its eleventh year, the organization is carrying on without any financial help from any government or private enterprises. Contributions from members form the only source of finance that helps Sampurna move from one event to the other.

Saffia Apa’s friends had told her that she was flogging a dead horse, but that did not deter her. Thank God for that. It is because of people like her that our musical heritage is alive still. But Sampurna needs active support from all those who believe in the cause to continue. Saffia Beyg and Sampurna can be contacted through the website www.sampurna.org.pk.

[This appreciation was exclusive written for Pakistan Paindabad.] 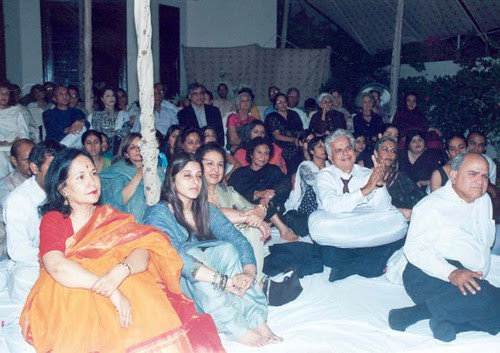 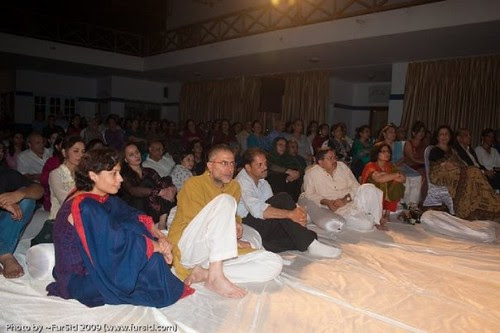 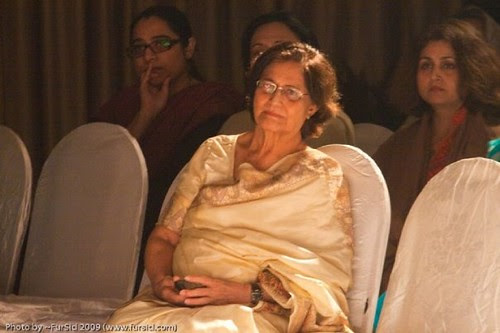 Posted by Mayank Austen Soofi at 6:07 AM

I am glad people such as her exist. Infact I am priveleged to have met her recently. Please keep up the good work and lets hope more people join in and support this worthy cause.
Fahim

Mano, this is great!
I have exchanged correspondence with Safia Appa -- she is wonderful and inspiring -- shall meet her, inshallah, when I visit Pakistan in two weeks.