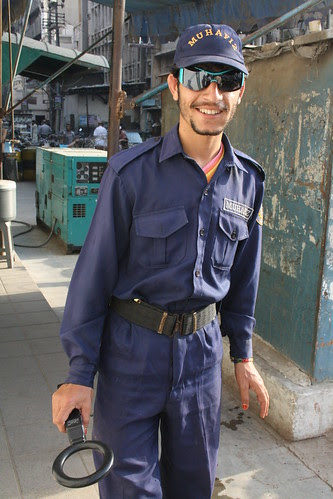 It is 7 am. The room is lined with old paperbacks. Tiger, the house dog, is looking out of the grill into the garden. Rosemary, the maid, is calling me for breakfast. But I’m listening to the sound of birds.

This is a friend’s bungalow in a Karachi neighbourhood called PECHS. The friend is in Lahore and this big house - with its three staff members and thousands of books – is feeling like my one-room staffless apartment in Delhi.

Soon the day will grow warmer and I will venture out. Although this is a foreign country and the city is reluctant to share its secrets with a week-long visitor, I’m bent on making it accept me.

I'm trying to catch up with its rhythm since the evening I landed in Jinnah Terminal. In Defence Housing Authority’s T2F cafe, I listened to a gig by the band ‘Look Busy, Do Nothing’. In Zamzama Boulevard, I dined at Copper Kettle. In a Clifton bungalow, I met fashion designer Umar Sayeed.

A day ago, I had lunch in the book-lined house of a poet whose living room was decked with paintings by MF Hussain. Later I took an afternoon nap in the poet’s guestroom. The bedside table had the Urdu hardbound of The Complete Poems of Mirza Ghalib. On the shelf, I spotted: The Complete Poems of Anna Akhmatova.

That night I stood outside the heavily-secured Bilawal House, the Karachi residence of the Bhutto dynasty. A few minutes later I was purchasing Hillary Mantel’s novel Wolf Hall at the Liberty Bookstore in Clifton.

However, this is not enough. I want to meet people in the streets, eavesdrop on the conversations in the chaikhanas and buy books at the second-hand bookstalls. But I’m told Karachi is an unsafe city. The well-meaning Karachiwallas have adviced me that:

Don’t take out your cell phone in streets.
Don’t dangle the camera around your neck.
Don’t go out accompanied.
Don’t talk to strangers.

Concerned friends watch over me. They demand to know where I'm going and whom I will be meeting. One friend’s car drops me. Another friend’s car picks me up. I'm being constantly watched.

Yesterday evening I escaped. I walked freely. I had French fries from a street stall in I. I. Chundrigar Road. I ordered Coca Cola at Khairabad café in Shaeen Complex. I sat at an empty bus stop opposite the Supreme Court. At the Empress Market in Saddar, I took pictures of hazrats and smiled at khawatins.

In the night, I took an auto-rickshaw for back home. The driver had a beard. His head was turbaned. He said he was from Swat, in the northern region of Pakistan. Was he a Taliban militant?

The driver took the rickshaw to unlit streets. He drove past abandoned parks. After half-a-dozen turns – left and right, he stopped the rickshaw at an intersection and walked to a man standing under a lamppost. They talked for a few minutes and then they both looked towards me. Would I be kidnapped? The driver returned and we again resumed our journey. He said that he has lost the way. After ten minutes, the rickshaw crossed a road that I recognized. “This is Khushal Road,” I exclaimed. Soon we stopped outside the friend’s bungalow. The driver said, “Son, God is great.”
Posted by Mayank Austen Soofi at 5:30 AM

Our cities cannot be safe until we begin to rehabilitate all the arrested militants. The second step of the strategy would be used these men against their leaders to finish this mindset from the root.

Recent target killings in the city are a sign of danger. Violence needs to be curbed greatly in the country I must say. We must kill the Taliban mindset as it continues to spoil the situation of the country economically.

All the cities of the country are unsafe due to terrorism. It is not just Karachi. But one thing is sure that the answer to all the problems is rehabilitation of the terrorist who are creating violence.

These target killings have ruined the future of this beautiful city, people are worried and are restricted to their homes. We need to find a way out of it, and that is only possible by reconciliation efforts.

Mayank, I'm enjoying your travelogs in Pakistan Glad to see an Indian write about Pakistan without condescension, without being clouded by bias. - An ex Indian who hopes to visit Pakistan someday.