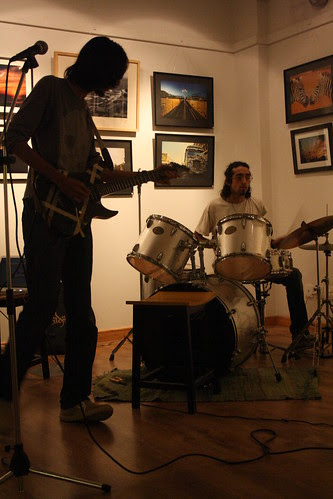 Most regulars to The Second Floor, or T2F, are young and speak with an American accent. If this were some other city in some other country, T2F would have gone unnoticed. But this pricey café with a rather unimpressive bookstore and an art gallery is unique. There is no other hangout in Karachi — or in Pakistan — that brings such a crowd of writers, poets, painters, filmmakers, musicians, bloggers, book-lovers and trans-gender people to one place.

“This is an alternative space,” says Karachi-based author and former editor of the Internet magazine SPIDER Bina Shah whose new novel, A Season For Martyrs, has just been translated into Italian. “It’s not a pro-establishment place. It’s a little subversive.”

This isn’t Islamabad or Talibanland. The wall opposite Shah is decked with a painting of two nude men. “It was part of a mural done by the gay artist Asim Butt who committed suicide early this year,” says Sabeen Mahmud, who co-runs T2F. “I have queer people saying to me that this is the only place in Karachi where they feel safe.”

Opened in 2007, T2F, operated by — like most things in Pakistan — a non-profit organisation, quickly became the place for Karachi’s cool set to hang out. Urdu poet Zehra Nigah came here to recite her verses on America’s war against terror. A session on Mirza Ghalib attracted an unexpectedly large crowd after the 19th century poet was marketed as ‘the original hippie’.

T2F has also held events in the past that were not calculated to please the Pakistani establishment. It invited author Ayesha Siddiqa to talk about her book Military Inc., an expose on Pakistan’s military institution, screened a film on the country’s missing people while its director was being hounded by the Inter-Services Intelligence. Call it Pakistan’s radical chic spot.

This silent chattering class is also the set of people who make up Pakistan’s liberal, urban, globalised civil society – sandwiched invisibly between the politicians, lawyers, the generals and the Taliban-types. The hijab is non-existent in this layer of Pakistani society, but it’s still tucked away from the usual ‘international’ images of a country buttressed by violence and disorder.

In the past, Pakistan’s liberal ‘café society’ had more influence than it has now. In Karachi’s rival city Lahore, the now-closed Pak Tea House was an artistic hub frequented by poets and writers such as Faiz Ahmed Faiz and Saadat Hasan Manto. In Karachi’s Irani cafés, politics was dissected over tea and patties. “A modern successor to old-world cafés, T2F caters to a new generation that has grown up in the so-called ‘liberalism’ of the Musharraf era,” says journalist Beena Sarwar. “Here people come in with their guitars or laptops. They care about the state of the world and also like their coffee well-brewed.”

In keeping with T2F’s high-brow USP, TV journalist Insiya Syed is reading a Michael Ondaatje on the terrace. “The impression that Pakistani women come out only in a burqa or a dupatta is bullshit,” says Ms Syed, wearing skin-tight jeans and a t-shirt. “I usually wear jeans to office, which is on the busiest road in Karachi, which I cross ten times a day and no one frowns.”

In a city that hosted Pakistan’s first fashion week in 2009, the women wear is coming into its own after years of hibernation called ‘Chaadar and chaardiwari’. Dupatta is no longer necessary. Girls on streets are seen in hipster jeans and long skirts. In evenings, society ladies wear strapless dresses, long flowing gowns and even short cocktail dresses at charity balls and club dinners. Sarongs are popular in beach parties.

In Karachi lingo, you are either a ‘Burger’ or a ‘Bun Kebab’. ‘Burger’ kids live in the posh areas of Defence and Clifton, speak accented English, date in Zamzama Boulevard cafés, and party at the secluded ‘French Beach’ on weekends. ‘Bun Kebabs’ live everywhere except in the posh bits of Karachi, speak Urdu-peppered English, hang out at Jinnah’s mausoleum and meet extended relatives for social dos. Burgers feel at home at T2F, Kebabs don’t.

T2F’s posh reading tastes come out strongly. “We don’t accept John Grishams,” says Mohsin Siddiqui, a blogger who selects books for the café. “The point of this place is to encourage discussions. Trash literature such as the Twilight series won’t be able to do that. We keep Robert Fisk, not Dan Brown.” Literary snobbery in a country where a book is a bestseller if it sells 5,000 copies. “I wish Pakistan had a Chetan Bhagat and a Shobhaa De,” says Ameena Saiyid, managing director of Pakistan’s Oxford University Press, which, organised the Karachi Literature Festival with the British Council.

Wearing an embroidered salwar kurta, graphic designer Tehmina Fatima, is waiting with Ms Syed for a gig to be performed at the T2F by Karachi band, Look Busy, Do Nothing. As she lights up a cigarette, the talk veers towards terrorism. “Yesterday three people died in a blast in Saddar Bazaar but it was not breaking news as the number [of people killed] didn’t reach 30,” says Ms Syed.

“Sometimes it gets really depressing and then you come to T2F where you meet people who feel the same way as you. ” Ms Fatima butts in, saying, “You can’t imagine it in other hangouts. There, everyone lives in a bubble and talks about beach parties and boyfriends.”

But isn’t that also important? “Yes, sometimes I go to other cafés to talk crappy stuff,” says Ms Syed with a laugh. “It’s a release valve.”

Meanwhile the three-member band has swung into action. The pencil-thin Talha Asim is playing the lead guitar. The curly-haired Kayzad is beating his drums so fiercely that the cymbal falls on the floor with a crashing noise. Daniyal, the bassist, stops to look up but then resumes with his guitar. As the evening ends, everyone claps. A few hugs later, they all get into their BMWs. Most probably to the beach. 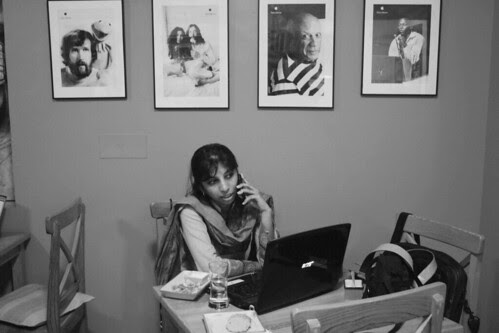 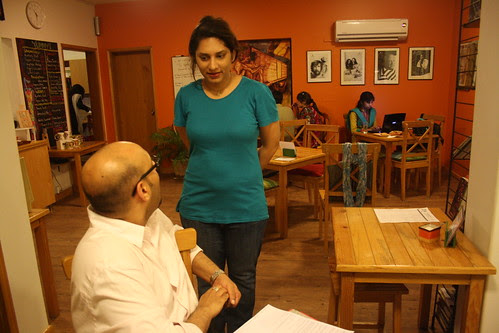 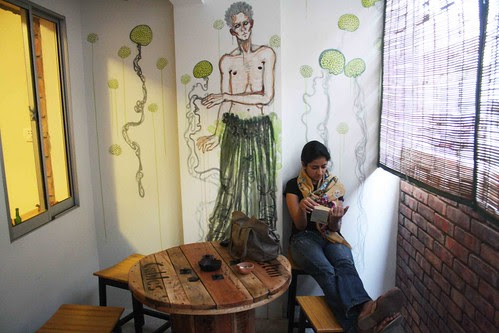 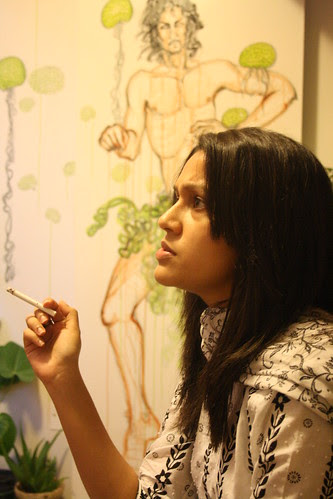 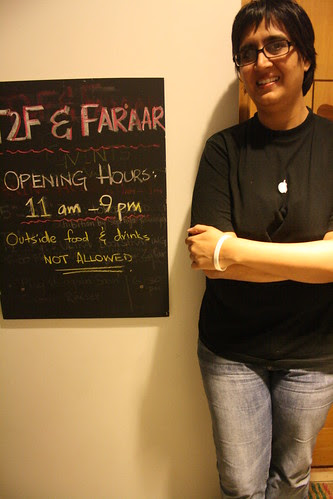 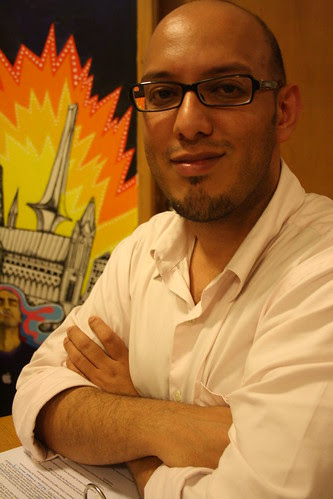 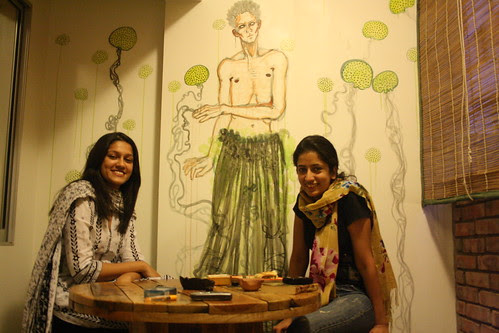 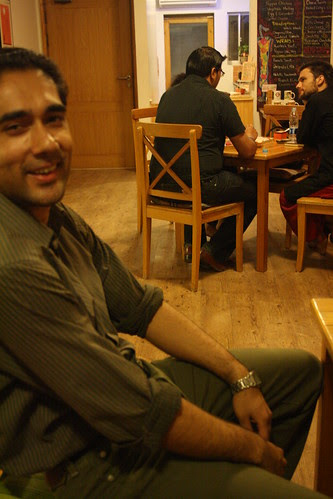 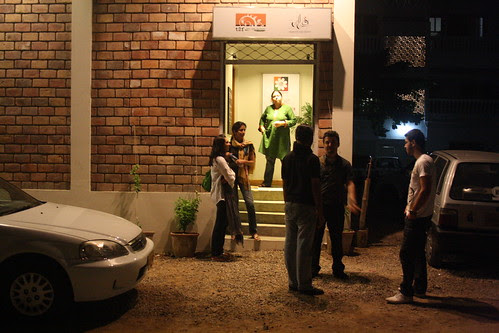 Look busy, do nothing 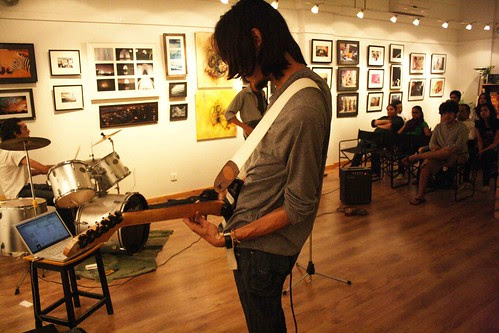 Are they looking busy? 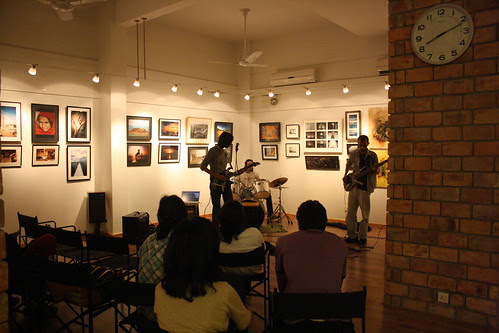 Another world is possible 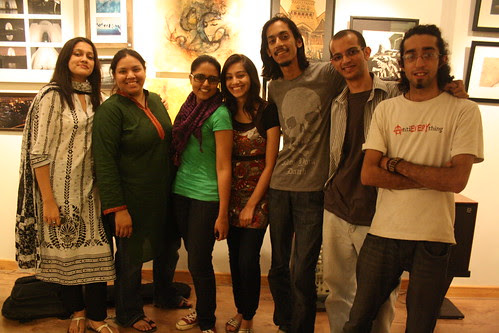 It is still 11 AM to 9 PM
I can't place it, few n'er account a change - a difference, plus they're all weirdos
so..no