Letter from London - Why I Love Pakistan 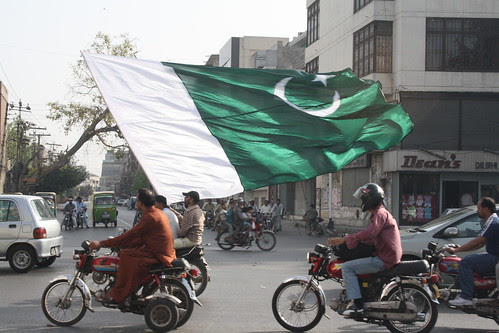 I've worked in Mumbai and been in India many times, but have always had an ill-concealed soft spot for Pakistan, which sits in the west of the subcontinent.

Pakistan has a much longer history than its three-generational link to 1947 -- it's the land of Gandhara Buddhism, Ashoka and his pillars, the lovely city of Lahore and the archaeological remains of Mohenjo Daro as well as the Indus Valley civilisation. And, like India, it's a land of stunning landscapes, peaceful farming lands and a tight bond between land and people.

It is also at this moment a troubled part of the world. Like India, Pakistan has been able to do little about the rising poverty of its rural poor. Unlike India, it has a long way to go to expand the educated middle class which, over the border, has been responsible in great measure for a buoyant and expanding economy.

Pakistan trains fantastic lawyers (often called to the Bar in London), doctors, engineers, bio scientists, economists and statisticians, teachers and IT specialists, but they often struggle to find the rewarding careers that would be theirs in the west. However, this is beginning to change, largely due to the return of a young generation of American-educated go-getters.

Crucially, the middle classes have also found it difficult to penetrate politics through the National Assembly, where zaminder (landowning) interests and opaque power deals between the army and religious parties predominate. As in India, you need deep pockets and good connections to enter politics. As Salman Rushdie said in Shame (1983): "You can get anywhere in Pakistan if you know people, even into jail."

If India mutters about the ever-present "foreign hand" interfering -- with justification, as both the KGB and the CIA have held sway in New Delhi at different times -- Pakistan has it for real.

Saudi Arabia's charming export of Wahhabism (latterly in the form of the Taliban and al-Qaeda) has been wreaking havoc in the region for decades, destroying the indigenous and centuries-old subcontinental Sunni Sufi mysticism and putting pressure on Pakistan's courtly and aristocratic Shia intelligentsia as well as its Ahmadi, Hindu and Christian minorities.

It would have needed an exceptionally strong, moral, good, worldly and intelligent leader of Pakistan in the 1970s to avoid the lure and trap of Saudi money, which was accepted to improve the country's infrastructure and real estate. Zulfiqar Ali Bhutto was not it.

While Pakistan's international image has suffered immeasurably in the intervening years, I would urge all who love the subcontinent to look past the headlines and the international analysis, and see a country which, for the moment at least, is cut off from its continental neighbour. Here are my own reasons for loving Pakistan:

1. Women are noisily at the centre of Pakistani life. Challenging and vocal, they sit at the heart of the family and have made good progress into professional and political life.

Declan Walsh reported the terrible attack on the Ahmadi community in June, and noted that it was three women from different parties -- ANP's Bushra Rehman, MQM's Khushbakht Shujaat and PPP's Farahnaz Ispahani -- led by the former PPP minister Sherry Rehman, who crossed the floor in the National Assembly and made sure the legislature said "no".

In human rights and the state's nurturing of all religions and religious minorities, Pakistan has never gone far enough. But with 30 per cent of seats in the National Assembly occupied by women (India has 10 per cent), they are playing a more significant role in the legislature. That may help bring the country back to Jinnah's original ideals of a tolerant, secular nation.

2. Pakistan has a line in very attractive men, from old heart-throbs such as Tariq Ali and Imran Khan to a younger generation such as Lahore's most happening export to Bollywood, Ali Zafar.

Outlook India recently ran a fascinating piece about the film history of Peshawar: Shashi Kapoor and Shahrukh Khan's families were from this region. I very much hope that Sanjeev Bhaskar won't mind if I put his handsome features down to west Punjab, where his family lived for centuries (his father's ancestral village was Badhoki Gosaiyan).

And you will be hard pressed to find sweeter coverage than the respectful and affectionate writing about women in the weekend papers.

3. Pakistan has a varied and lively media, though perhaps not always on the side of the angels. But probably more than India, it has a range of sophisticated English-language newspapers (firmly on the side of the angels), including Najam Sethi's PEN Award-winning Friday Times and Karachi's Dawn. (Their closest competitors in India are Vinod Mehta's Outlook India and the Hindu.) Both are written in classic, poised prose and boast incisive columnists as well as world-class books, arts and cultural coverage.

In Mohammed Hanif, Ali Sethi, Mohsin Hamid and Kamila Shamsie, Pakistan has a growing raft of writers (some of them Harvard-educated) who explore political and social themes.

4. The country survives daily life on humour, a curious cross-blend of the subcontinental and something rather like Oxbridge Private Eye. But if in the west the well of ribaldry comes from the misfortune of others, in Pakistan, the humour is rather more subtly how people try to find their way out of that misfortune.

It's a richer hoard altogether that provides endless material at social gatherings, as well as for TV star transvestites such as Begum Nawazish Ali.

Over the border in India, the vaudeville slapstick of Mr Bean appeals greatly to audiences. Pakistan finds itself closer to Yes Minister.

5. Pakistanis adore their children: to be born into a settled family in the subcontinent is to enter a very happy world of love and adoration. Only Italians compare in their child-worship. It's not such a strange thing to mention, because in the west there are still hints of Victoriana in our upbringing -- don't talk with your mouth full, don't point, it's rude to stare, say you're sorry.

If you're a boy in Pakistan or India, you're on a winning ticket. Not only will be you adored and pampered, but you'll be allowed just as rich an emotional life as the girls. By contrast, British boys are expected to rein it in. Pakistani fathers are proud as Punch of their girls and their ability to outshine the boys with top marks at school and university.

6. It is a country that thrives on mixed metaphors. So, for those to the west of the border, the song I choose for you is the hauntingly beautiful "Yeh duniya agar mil bhi jaye to kya hai" ("What Is This World to Me?").

It comes from the film about mistaken identity and lack of life's essentials Pyaasa (Thirsty, 1957), directed by and featuring Guru Dutt, a Hindu whose melancholy perhaps made him an honorary subcontinental Muslim. The melody was written by S D Burman (a Bengali Hindu), the lyrics were written by the Urdu poet Saahir (Abdul Hayee, a Punjabi Muslim) and they were sung by Mohammed Rafi (another Punjabi Muslim). You can watch it here.

It's worth remembering that although the song does not have a happy ending, the film does.
Posted by Mayank Austen Soofi at 9:23 PM

A lovely piece and an affectionate tribute to a wonderful country. But did you have hark to India in every paragraph? Pakistan and its people are greater than the sum of the inevitable, unnecessary (and odious) comparisons with its neighbour.

Same thing here too. what's with the constant comparison with India?
Pakistan has its own charming existence, respect it.

Seems to me the author likes Pakistan for the wrong reasons. Amusing to see her squirm for fear of offending Indians just because she has said some nice words about Pakistan.

Finally, please get your facts right and do not mimic others. Jinnah would not describe himself as secular. Read his speeches - he held that the best in human civilisation could be traced to the influence of Islam. If he really wished to be "secular" there was no need for him to leave the Congress political party and join Muslim League. Do not forget that Jinnah's father had converted to Islam from Hinduism, and that background enabled Jinnah to understood the Hindu politicians in a way that many established Muslim families could not.

As for "Dawn", it is a disgrace. It is not just a bad newspaper, the activities of its owners/managers border on the criminal. You can read about the dark side of Dawn here: http://theterrorland.blogspot.com/

Why you love Pakistan? Let me tell you, the answer is pretty simple after reading this article. You love Pakistan because you hate India. What the heck, why do you people always have to draw comparison with India to talk about Pakistan? Pakistan is incomparable with the giant called India which is moving into a very direction altogether, be it ideologically, economically or politically. Talk about apples and strawberries.

i have been really disappointed by the comments of saqib ahmad and monica. both of them showed some narrow mindness. i advise them to b vast minded. if some body admires pakistan, it is not false. i invite them to visit pakistan and see with their own eyes that how a beautiful country pakistan is. if here in pakistan somebody likes tendulkar, we never mind due to our vast hearts. we felt very happy when india won world cup. monica g, no doubt india is a huge country with its population, market and economy but i personally visited india and i feel that pakistani people are living more happily. pakistan has beautiful roads,universities, cities and other modern as well as ancient places as described in the column. plz come and see. do not b jealous. we will welcome u and when u will go back u will realise that the colum was exactly right and it were u who was biosed.i think mr. sakib has not read miss sarojni naido(nightengale of india) who used to say mr. jinnah ambessoder of hindu muslim unity. mr sakib should also study jaswant singh book about quaid e azam. further he must study dawn rather being personal to dawn by qouting some irelliable site. at the end we should throw our ill thoughts regarding each other out of our minds and hearts and love india, pakistan, bangladesh, nepal, bhutan, srilanka and maldives. athar mazari, rojhan, pakistan.

"Talk about apples and strawberries."