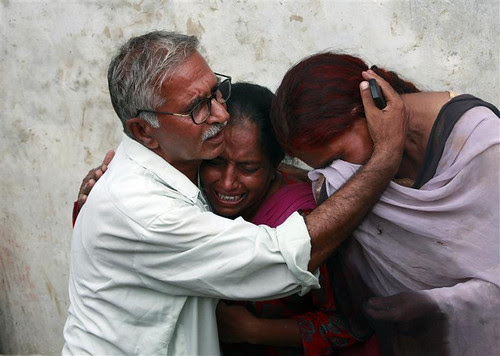 [Text by Mayank Austen Soofi; picture by Faisal Mahmood of Reuters; the man is consoling his family members after they returned to find their homes destroyed after heavy floods in Nowshera, located in Pakistan's northwest Khyber-Pakhtunkhwa Province, August 3, 2010. ]

On the evening of August 16th, 2010, I was in Delhi’s Ambassador Hotel. The Indian capital’s leading opinion makers, including the Prime Minister’s wife, gathered to celebrate the launch of author Khushwnat Singh’s yet another book. If somebody mentioned Pakistan’s harrowing humanitarian flood crisis over cocktails, I did not hear it.

The same night I got this distress e-mail from Navaid Husain, an architect friend in Karachi. “The floods have knocked Pakistan to the absolute bottom. 20 million displaced people. So many houses, schools, roads, bridges, factories knocked out. Loss of so many cattle, goats will push up the price of milk & meat. On the pictures taken by satellite shows so much water all over. Much of this water will stay stagnant & will take months to settle down. Lack of clean drinking water is already causing sickness.”

I immediately called Saeeda Diep, my activist friend in Lahore. She had just returned from Amritsar, the biggest city of the Indian side of Punjab, where she had gone to light candles in the border post of Wagah. Diep was shocked that the biggest tragedy of her country was not causing even a whimper with the neighbour. “Except Lahore and Karachi, my entire country is gone. Pakistan is being wiped out. It’s worse than the Indian Ocean tsunami and Haiti quake but for two days I read the Indian newspapers and found nothing, absolutely nothing, on Pakistan’s flood crisis. The Indian news channels were busy bashing Pakistan on terrorism.”

Is it true that Indian media is silent on Pakistan’s worst natural disaster?

"Understandably, there is a considerable coverage of the flash floods in Leh but so little space has been given to a far far greater natural disaster across the western border,” says Andrew Buncombe, the Independent’s Delhi-based Asia correspondent who had just returned from flooded central Punjab. “There may be several reasons for this. One of which is that Indian and Pakistani journalists have difficulties of obtaining visas to visit and work in each other’s countries. However, it does seem as if there is a blind spot within the Indian media towards the current, obvious suffering of the Pakistanis. Instead, the stories that have come out have largely focused on issues such as the weakening of Pakistan’s civilian government, the increased power of the military and procedural difficulties in processing India's donation of $5 million – which, while something, is not a massive amount given the scale of the floods.”

Indian journalists may not agree. “In Hindustan Times, we are carrying 7-8 column space daily on the floods,” says Samar Halarnkar, the Delhi-based newspaper’s editor-at-large. “You can’t do more because your readership doesn’t care about calamities such as floods, unless it’s happening in their own backyard. This is a modern media issue. It’s not about Pakistan. How many people know that Bihar is reeling under a severe drought currently?”

I then e-mailed Indian Express columnist Taveel Singh known for her harsh views on Pakistan. “The truth is that there is very little sympathy for Pakistan in India after 26/11,” she wrote referring to terrior attacks in Bombay by Pakistan-based terrorists in 2008. “With the floods in Leh causing considerable loss of life people are more concerned about that. Also you may not be aware that after the Kashmir earthquake Indian construction companies working on rebuilding houses on our side offered their help to the Pakistani government and it was rejected. As far as I know the Indian government's offers of aid this time have also been turned down.”

I checked out the latest issue of India Today, the country’s leading news weekly. There was no story on the floods in its thick 152 pages. The last page, though, had a small anecdote on Pakistani Prime Minister Yousuf Raza Gilani being an admirer of Bollywood singer Lata Mangeshkar. The other reference, on page 22, had a weekly column by the magazine’s Editor-at-Large, S. Prasannarajan, in which he blamed the ongoing Kashmir unrest being “played out under the gaze of Pakistan, which has unarguably become the unofficial headquarters of jihad.”

“The fact is that the tragedy has stuck an enemy. The corporate media is there to serve the market or so they say. The market demands jingoism and that they focus on our ‘own problems’, you know ‘Peepli Live’ and Aamir Khan kind of Bollywood subjects,” says Gaurav sood, a Stanford University scholar.

I logged onto the website of Tehelka magazine, known for its activist-ridden stories that dares the establishment by presenting the alternative truth. I searched for the word ‘flood’ and found nothing.

“In Amritsar, I watched the live telecast of Prime Minister Manmohan Singh’s 40-minute-long speech in Delhi’s Red Fort,” says Diep. “If only he had mentioned about our tragedy… just one line on how sad he is… it would have made us Pakistanis think that yes, Indians care.”
Posted by Mayank Austen Soofi at 10:27 AM

Well Mayank, tell me how many people here are interested in reading of disaster stories in India itself. We are self obsessed and in love with our own image as among the fastest growing economies in the world. An nothing must come between our self obsessions. Pakistan may be deluged but for Indians, its not something that strikes a chord with them. After all, more Jihadis drowned, so serves them right. Sad, but true......

More Jihadis drowned in the Indus. Why should India care?

when i was small(toddler),my dream was to unite pakistan and india.i thought i wud make everyone realise that we are same people

there was a show on ndtv where the indian media clearly said visas was a problem . this tragedy is horrific but the reality in todays world is indians just dont trust pakistanis .i am an expat based in bombay and post bombay attacks the feeling in the country is very hostile at the ground level too. earlier in the days it was hindu - muslim animosity when it came to pakistan . now it is indian vis a vis a pakistani . indian muslims have also had enough of bomb attacks et al...and all go back to pakistan.

I feel we should rise above this hostility towards each other. We should leave a happy place for our children to live. Let us move on from Mumbai, and make a gesture of friendship perhaps it will find a resonating chord there!

Not surprising at all, not just India the whole world seems to be immune to these disasters happening in Pakistan (both man-made and natural)
And why should the world care? Just two weeks back RCMP caught four Pakistani planning to bomb Canadian Parliament. The list is endless, Pakistan is an almost annarchy producing Jihadists.
Indian media is right in not highlighting the floods, and of course the Indian PM is right as well. For all we know Pakistan's policticians could be blaming India for these floods as well.
And why should India care when their own President could care less and spend time in his Chateau in Provence.

Flip the coin - I dont see any of the Comparisons on Indian Television.
"Sorry I digressed".
Back the main point:
Why is it that Pakistan is so interested to have their tragedy on our TV sets? We dont want it! Simple as that.
Common People (not the ones you have met Mr. Blogger) accross the border view India with Hawkish eyes and ideologies and thus it maybe food for thought for them but not for us.
And why should we? We offered $5M to them.. peanuts as compared to the huge amounts they are currently receiving but have they ever responded to any of Indias tragedies over the years?

Someone above commented More Jihadi's drowned -- bad taste and bad form. Human Life for India is human after all... we still express solidarity despite being repeatedly raped by elements accross the border. The offer for aid is still on the table - its a good amount - an amount which can buy you a lot of medicines, tents, effective clothing, blankets - come on TAKE IT!

If you love Pakistan so much then why don't you convert to the "Religion of Peace" (tsk tsk) and settle permanently in Pakistan.
We don't care what happens in Pakistan. Who cares if another couple of thousand Islamofacists die.
I have been watching Pakistani networks on and off since the last two years and all I hear about India is a continuous Anti Hindu diatribe and all sorts of fake news about India.
Why would we care about a nation that thinks that Hindus deserve to be ruled by Muslims and maybe even killed. Go to any Pakistani forum and you will see the sort of hatred they have for India and especially us Hindus.
I say that the law of Karma is working well and its good to hear that Pakistan is drowning, I wish them many more such calamities.

We have enough poverty in India to tackle before we start looking for charity elsewhere.
What do you want India to do ?
Starve Indian to give aid to Pakistan to buy more weapons to kill Indians.
You have enbarked on cheap publicity Mayak.Nothing more than that...........
Why were you in Ambassador hotel and not serving poor people in slums of delhi or Flood hit people of PAKISTAN.
People like you are arm chair intellectual who are thin on ground.
When Billions given by WEST and America has not bought any friends for them then do you want Indian money to be squannerred.

I am wondering y Pak want's Indian media to mention about Pak's disaster? When ur cntry reject's our geniune offer of million's of $, which could have been used for our own citizen's who r desperately needed. Why is that ur cntry is alway's a begging bowl? UR cntry takes the aid from all the cntry including India & use that aid to kill inocent citizen of India just think 26/11. UR cntry is full of hatred against indian's & hindus & ur cntry has become terrorist breeding place, no matter what India do to please Pakistan it will never be satisfied, sooner it will realize what it will be missing being friendly with India rather than being confronting with India.

i feel for the innocent people of pakistan.no one deserves a calamity like that. It is somehow so bloody unfair that an entire nation is held ransom to the whims and fancies of a hand full of terrorists. But to be fair, i think its about time that even pakistanis begin to refer to the as terrorists.

In an era where there is a genuine need for mass concience to appear, the calamity (and im sorry to say this) is a missed opportunity for peace. From india's side, reaching out could have helped garner popular perception about india among pakistanis.

once in a thousand years, does an opportunity to become a superpower surfaces. The people that we are, we allow history to cloud our vision and deny ourselves that possibility.

I came across this blog just today. Honestly, as an Indian, I couldn’t care a rat’s back end if all of Pakistan disappeared tomorrow afternoon. My reaction would be Good Riddance. And I can assure you the reaction of 95% of our population would be something similar. When you send terrorists to murder our innocent citizens, do not expect Indians to have any sympathy for you.