Karachi Diary - The Discovery of a City 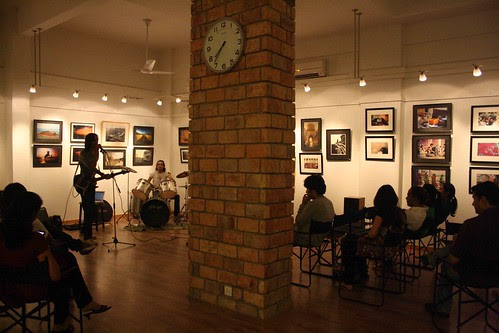 The sum total of its people.

[Text by Rakhshanda Jalil, photo of the T2F cafe by Mayank Austen Soofi]

It appears to be a truism much acknowledged that Delhi and Lahore are soul sisters. Yet, I must confess, I saw no such striking resemblance between the two cities on my first visit a couple of years ago. A recent visit to Karachi, however, struck a chord in my born-in-UP but raised-in-Delhi heart.

Here was a city that was brimming with joie de vivre, was sassy and smart, strangely known and familiar. Despite being festooned with banners showing a hauntingly brooding Benazir Bhutto (I was there during the last week of December when the city was observing her second death anniversary and her husband, the President, was visiting the city), there was nothing haunting or brooding about the city itself. My fears about Kalashnikov-toting Taliban and marauding Muhajirs proved to be entirely unfounded as I discovered a city not unlike my home, Delhi.

My first visit to Pakistan — to Lahore, Faisalabad and Sargodha, to read papers at the universities — three years ago had reminded me, more than anything of rural Punjab, our Punjab that is. And while I remember being struck by the keenu-laden trees of Sargodha and the pretty women of Faisalabad, I must confess to being oddly un-struck by Lahore itself. Perhaps, it was the hype and expectation. Perhaps, it was the weight of expectations. Or, perhaps, it was being told to look for similarities between the so-called twin cities. Yes, there were the wide, tree-lined avenues and grand colonial-style buildings. Yes, there was the Jama Masjid and parts of the old city. Yes, there was the profusion of tombs, pavilions, mosques and dargahs. And, yes, there were the tall, well-built, good-looking people. But still, something was missing.

On my second visit to Pakistan, this time to Karachi — again to read a paper but this time at a seminar organised by an NGO called Tehrik-e-Niswan — I found that elusive connect when I was least expecting it. For one, I heard the most immaculate Urdu, the sort one would in a provincial town of Upper India. For another, there was the city's in-your-face chutzpah and cosmopolitanism that reminded me in many ways of Delhi. Yes, there were no Mughal tombs and pavilions. Yes, there were fewer leafy avenues and parks. And, yes, the salt of the sea breeze and the dockyards were more reminiscent of Bombay. But, like Delhi, this city of migrants had brought bits and parts of their old selves from different parts of undivided India – from Goa, Delhi, Kutch, Saurashtra, Madras, Hyderabad not to mention large swathes of United Provinces, Bihar and Bengal. And while they named their enclaves after their cities back home, where they sold Dilli ki nihari or Bihari kababs or Hyderabadi biriyani, they had also created other spaces, spaces that are liberal and secular.

Walking into the seminar room of the Oxford University Press building in Korangi, I feel I could be at any book launch back home. Women in silk saris and men in natty blazers, and the ebb and swirl of the usual chatter among writers, publishers, journalists and book reviewers tells me how artificial borders can be sometimes.

Sheema Kirmani, the indomitable driving force behind the Tehreek-e-Niswan (The Women's' Movement), is a woman of many parts — a trained Bharatanatyam dancer, a teacher and choreographer, a street theatre veteran and a battle-scarred activist. She has collaborated with Ameena Saiyed, the dynamic managing director of Oxford University Press, to gather a bunch of eclectic delegates – writers, activists, women's rights experts and theatre persons – to celebrate ‘Tees aur ek saal' (Thirty and One Years) of the Tehreek's existence.

The conference begins with a ‘Tilla' performed by a young man from Baltistan with slanting eyes, high cheekbones and near-perfect footwork followed by a ‘ Pushpanjali' by one of Sheema's 11-year old pupils.

The feisty Urdu poet, Fahmida Riaz, reads a scholarly paper on being a woman, a writer and an activist soon after we have watched a dramatic re-enactment of her seminal poem, Chadar aur Chaar diwari (The Veil and the Courtyard). I am intrigued by the way in which performances are interspersed with academic presentations all through the two-day seminar.

My paper on ‘Rashid Jahan: Communist Doctor and Writer' is accompanied by an enactment of two of her plays by the Tehreek's troupe. Rashid Jahan's plays and stories, written in the 1930s and 1940s, transcend their time and age and still speak to us with the same urgency.

Moreover, they remind us yet again of the commonalities, of the ties that bind, ties of history and culture, which transcend the ties of religion or nationhood.

Zafarullah Poshni is a spry, immaculately dressed 83-year-old. He works for ‘Manhattan', a posh advertising agency in the upscale neighbourhood of Old Clifton. Long years ago, he had shared a jail cell with Faiz Ahmed Faiz, the legendary Urdu poet. Then a young captain in the Pakistan Army, he, along with 16 others, had been jailed in the infamous Rawalpindi Conspiracy Case. Charged by the Liaqat Ali Khan regime of a conspiracy to overthrow the government and destabilise the country at the behest of left-leaning intellectuals and foreign powers, Poshni, Faiz, Sajjad Zaheer and other fellow-accused faced an uncertain future as the threat of death hung over their hapless heads. Convicted of high treason in a trial that was a travesty of justice, Poshni recalls those days that marked the death of democracy in Pakistan. Unlike the case of Georgi Dimitrov and the Reichstag Fire Trial that had seized the imagination of the world in the early 1930s, the curious case of Zafarullah Poshni and others had been cloaked in secrecy and conducted behind the high walls of the Hyderabad (Sindh) jail. Eventually released in 1955 for want of evidence, the accused had walked away to build new lives; 50 years later, as Pakistan reels from coup to catastrophe, no one remembers the details of the so-called conspiracy. Poshni sahab's parting gift to me, his memoir Zindagi Zinda Dilika Naam Hai ( The Meaning of Life is Being Lively), bears witness to the indomitable courage and strength of character I found etched in every line and wrinkle of his still-handsome face.

Asif Noorani, veteran journalist for The Dawn, takes me on a drive around his city. He draws my attention to a crowd sitting under a tent with a van, which functions as a mobile kitchen, parked beside the road. It belongs to the Chhipa Welfare Association, which harnesses the goodwill of local businessmen with the ingenuity and drive of one man – Ramzan Chhipa. Where the government cannot — or does not —intervene, civil society groups, philanthropists and do-gooders step in to run what is virtually a parallel welfare state; what matters is the slack gets picked up and, as Asif Noorani tells me, no one sleeps hungry in the city. Edhi's ambulances ferry the sick and ailing to hospitals and relief and rehabilitation programmes are undertaken by intensely-driven young people such as Adnan Asdar. And so, while the city has its oases of privilege, such as the Raj-era gymkhanas and clubs where the blue-rinse set play bridge and mah-jong, it also has men like the Magsaysay winner Edhi and Asdar, Relief Coordinator of The Citizen's Foundation, who devote their lives to filling the cracks between the system and the people.

On my last evening in Karachi, I find myself at T2F, the city's most radically hep hangout zone. Café-cum-bookstore-cum-art gallery it also has a small performance/lecture space for an invited audience. I talk about Angarey, an Urdu anthology published in 1932 and banned three months later by the imperial government on charges of being subversive and blasphemous. My audience – a healthy mixture of young and trendy, and grizzled and sedate – represent the liberal face of Pakistani civil society. They know, perhaps better than most, the politics of proscription. The people I meet here, such as Sabeen Mahmud, the owner of T2F, are true-blue Karachites. They are also globalised citizens of the world. They enjoy their cappuccinos almost as much as they savour the poetry of a master such as Mirza Ghalib or a contemporary Karachi icon such as Zehra Nigah. Moreover, they speak Urdu and English with almost equal aplomb. I leave Karachi convinced that a city is not made of parks and promenades, clubs and colonies, malls and monuments; instead, it is the sum total of its people.
Posted by Mayank Austen Soofi at 10:25 PM

An interesting read but my own experience of Karachi is somewhat different.

The last time I was in Karachi I was taken to a posh eating place where the glossy menus were in English and the brown faces around me self-consciously chattered on in Pakistani English. I asked the waiter for a menu in Urdu but I was told - a bit contemptuously? - that there wasn't one. I rose to leave the place but I was persuaded to stay with a promise that I could make a formal complaint, oral and written, to the restaurant manager. So, as we waited to be served the dishes we had ordered, I scribbled a note of complaint in Urdu which I handed to the manager afterwards.

Pakistan's Brown Sahibs and Memsahibs do bend over backwards to ape the British and the Americans, fake accents and all. When they speak Urdu it sounds ugly because of a liberal smattering of unnecessary English words.