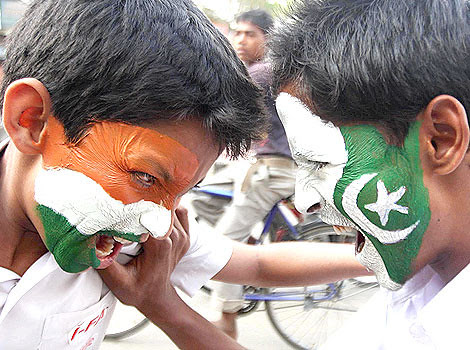 Thunderous crowd. National anthems. Fluttering flags. Two prime ministers. And a cricket match between India and Pakistan. Pakistan Paindabad wants the better team to win in the semifinal match of the 2011 Cricket World Cup, which is taking place – at the time of writing this piece – in Mohali, a town in the Indian side of Punjab.

But, truly speaking, we want Pakistan to win because:
a) The country need heroes
b) The country is suffering so badly otherwise
c) The country deserves a good news

But as we watch the live telecast on TV in Delhi and see Indian batsmen Virender Sehwag and Sachin Tendulkar hitting four runs on every ball, our heart goes out to our Pakistani friends in Lahore and Karachi. We are chewing our nails. This is silly. After all, cricket is just a game and no matter which team wins, it won’t really affect our lives or bank accounts but… wait, Sehwag is out! Yay, go Pakistan!

On the morning of the D-day, columnist Irfan Husian wrote in Dawn:
"I must say I feel for our team in Mohali: seldom will eleven men be asked to shoulder such a heavy burden of national pride. And while this is equally true for the Indian team, our boys have the additional responsibility of lifting a country that has suffered so much in the recent past. Never mind that much of our pain has been entirely self-inflicted: common people are not responsible for the mess Pakistan finds itself in today. And they are the ones who could do with the lift a victory would provide."

Although we are Indian passport holders, we won’t be disappointed if India loses. Despite the perennial problems of poverty, casteism and other problems, Indians – at least the middle-class Indians – have learnt to ignore their country’s black spots and delight themselves unabashedly in the grand illusion of an emerging superpower status. So if India is defeated, the happy Indians in the Mohali stadium can fly back to their bungalows in Jor Bagh and Bandra West and - after drowning the grief in martini - can plan out their next course in the pursuit of happiness. Pakistanis, on the other hand, have limited options. Their country is reeling under a suicidal gloom, thanks to Talibani terror, corrupt political system, and a secretive all-powerful army.

Meanwhile Tendulkar is still not out. Pakistanis are looking tensed. What if they lose? Mr Husain also wrote in the same Dawn column:
"Over the years, after hours of nail-biting tension followed by a huge disappointment as our men in green manage to snatch defeat from the jaws of victory yet again, I have devised a technique to lessen the dull ache of terminal let-down. My method consists of hedging my involvement by betting against Pakistan, so that if our team loses, I will at least have won my bet. And if they win, the pleasure I get from their victory is set off against my loss."

So, readers, give a cheer to both Pakistan and India. Wait, Tendulkar is out... yay, go Pakistan... wait, Tendular has been called back. Oh, Pakistan.
Posted by Mayank Austen Soofi at 3:10 AM

I think it is in the best interests of Pakistan that India won the semi-final. Imagine the scenario if Pakistan had won:

The credit for the win would have been claimed by the sick and corrupt Zardari-Gilani government, the unspeakable PCB chairman Ijaz Butt and last, but not least, the armies of comical mullahs ostentatiously holding prayer sessions for a Pakistani win.

Pakistan's time will come, insha Allah, but the timing is not right just now.